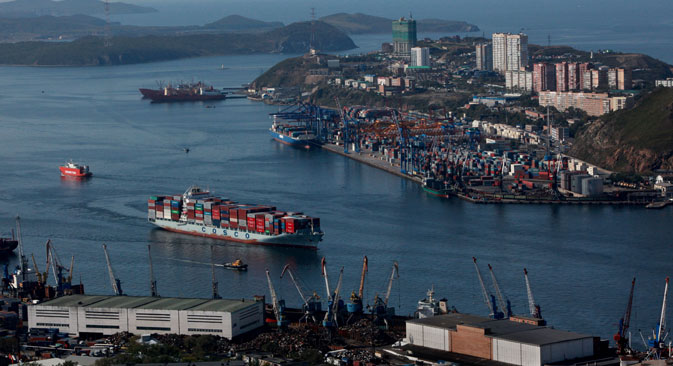 A view of the Zolotoi Rog Bay and the city of Vladivostok as seen from a pylon of the cable-stayed bridge. Source: RIA Novosti/ Vitaliy Ankov

‘Thailand and Russia - Bilateral cooperation through the lens of Thai business’ was held on November 3.

A special forum titled ‘Thailand and Russia - Bilateral cooperation through the lens of Thai business’ was held at the Dusit Thani Hotel in Bangkok on Nov. 3.

Russian Ambassador to Thailand Kirill Barsky opened the forum with a speech on the present economic situation in Russia and focused on the trends in Thai-Russian bilateral trade. He spoke about the success stories of 2015, such as Thailand's largest meat and animal feed producer, Charoen Pokphand Foods (CP Foods), which bought a Russian poultry business from Dutch firm Agro-Invest Brinky B.V. for $680 million.

Barksy also named Sutech Engineering Co. Ltd., which is in the process of building a Sugar Refinery Plant in the Khabarovsk Territory.  The state of the art sugar refinery complex with a logistics area and vessel terminal will have an annual capacity of 500,000 metric tons.

The Russian Ambassador noted that the Far East is a unique place for investors, as it offers land, infrastructure and tax benefits for businessmen. CP Group also plans to expand its agricultural activity in the Russian Far East.

Earlier this year, Russian President Vladimir Putin spoke of the need to speed up development of the Russian Far East. "Our main priorities in the Far East are an active social development policy, the creation of transportation and education infrastructure and of course, the expansion of economic freedom for domestic and foreign investors and better conditions for doing business," said Putin during a plenary meeting at the Eastern Economic Forum in September.

Last month, Vladivostok became a free port. The free port status initially provides administrative, customs and tax benefits to investors in the free trade area, which also includes 14 municipalities in the Primorye Territory. From January, foreigners can enter the city without a visa for 8 days.

At the Bangkok forum, Ambassador Barsky mentioned that Thais often claim that there is an absence of appropriate information about Russia’s economy, business, culture and education, and gave the floor to Eugene Abov, Publisher of Russia Beyond The Headlines, and Vice President of the World Association of Newspapers and News Publishers.

Abov said this information gap could be filled by good cooperation between Russian and Thai media outlets.

Pana Janwitness, President of Nation News Network Company, spoke of the bright prospects in the print media segment in Thailand.

The forum comprised of two parts, with the first part devoted to the print media, while the second was dedicated to business projects.

CP Group revealed its investment plan for Russia. Upon the authorization of Nutthakrit Sivasri, Chairman (overseas operations) CP Group of companies, Sombat Thiratrakoolchai, Senior Vice President CP Foods spoke about plans to invest not only in the Central part of Russia but also in Siberia and the Far East. He named swine, poultry, general retail, IT and Internet, E-commerce and robotics as potential areas for investment.

At present, CP Foods owns 10 pig farms in Russia, and the company plans to double its livestock in Russia to 1 million heads by 2020.

Moreover, at the St. Petersburg International Economic Forum 2015, the Russian Direct Investment Fund (RDIF) and the CP Group signed an agreement to establish a joint fund with capital of about  $1 billion. The fund plans to invest in projects for the production and distribution of food products, including dairy products, meat and chicken. One of the projects will involve the cultivation of shrimp in the Russian Far East.

Participants of the forum agreed that such kind of cooperation was likely to bring very visible benefits for both countries. There were calls to increase Russian investment in Thailand.

There was also an interesting presentation from Visanu Jaroensilp, Deputy Governor for tourism products and business tourism of the Tourism Authority of Thailand (TAT). Jaroensilp, who was TAT’s representative in Russia for four years, said a record 1.7 million Russian tourists visited Thailand last year. This year, however, the devaluation of the rouble vis-à-vis the dollar led to a 48 percent fall in the number of Russian tourists visiting the Kingdom.

TAT expects a revival from December 2015 to February 2016 as tour operators say there is a growing interest in Russia to visit Thailand during the peak season. Jaroensilp added that the Tourism Authority of Thailand expects 2 million tourists from Russia in 2016.

At the moment, TAT is working on new ways to promote Thailand for Russian tourists, including increasing the number of Russian-speaking guides and setting up booths to directly exchange roubles and baht.