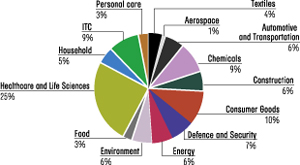 The Kremlin's enthusiasm for nanotechnology makes sense in the country's bid to develop a modern economy. But a commercial nanotech industry is thought to be some way off, with investors unlikely to show much interest for at least the next five years.

The nanotechnology industry, one of the stars of President Vladimir Putin's address to parliament early this year, has been pledged some $7bn in state funding for its development over the next five years. Putin mentioned it in the previous year's speech, too, so obviously this is important to the Kremlin.

On June 14, it was announced that Deputy Prime Minister Sergei Ivanov - thought to be the frontrunner to succeed Putin - will head the Nanotechnologies Council, on which he will be joined by a posse of industrialists and oligarchs, few of them with any obvious link to the subject. The body will provide expert evaluations on the development of nanotechnology in Russia. At June's St Petersburg Economic Forum, Ivanov reiterated the nanotechnology sector's role in pushing the Russian economy into the global top-five within the next 13 years. To that end, the push makes sense, say analysts.

Although sceptics dismiss nanotechnology either as coldly calculated (harnessed for weapons technology), or wildly utopian (driven by the desire of oligarchs to enjoy their riches for eternity), it is generally acknowledged to be a key to unlock advances that will impact virtually every facet of the world. Russia isn't alone in recognising the immense potential for commercial applications - let alone the revolutionary impact sub-molecular sciences are likely to have on the globe - and the traditional leaders in the sector (the US, Japan and the EU) are all also increasing the cash supply. The EU, for instance, has dedicated 3.5bn euros over the next six years, while the US - world leader in terms of funding - ploughs around $1bn each year into it. Meanwhile, the sector has not gone unnoticed by other emerging giants, with the rest of the socalled BRICs - Brazil, India and China - also active.

While the new Russian push more than matches what is happening in the developed world, the country still faces two distinct disadvantages.

First, the three traditional leaders in nanotech have established centrally funded and organised nanotech activities, with former president Bill Clinton's National Nanotechnology Initiative, launched in the US in 2001, seen as accelerating the global race.

Second, these same countries also have private, commercially-led industries, although an EU report from November 2006 expresses concern that while public financing is competitive, the level of private funding in Europe - around one third of the total in 2005 - will see nanotechnology lag, despite there being around 300 nanotech companies active in the EU. In Japan, meanwhile, almost two-thirds of R&D funding is from the private sector. The 54pc share of funding that the private sector provided in the US in 2005 alone totalled around 2bn euros, with nanobiotechnology and nanodevice applications benefiting most over several years.

Yet it's not just a funding issue. The base on which Russian nanotechnology will build is extremely low. Many commentators are keen to point to the strength of the country's technical educational base, suggesting this could help accelerate the evolution of the sector - as in other hi-tech industries - in the long run.

Vladimir Zaluzhsky of the Scandinavian private equity firm Mint Capital comments: "Today we see strong Russian telecoms with international ambitions. We can expect many other domestic industries to follow the same path. Some of these industries did not exist in Soviet times. They have been re-invented, so in that respect Russia can learn very quickly. Additionally, Russia has a colossal scientific background, and a huge domestic market, which provides a very good platform for training and preparing for subsequent establishment in international markets."

However, the number of Russian research institutions involved in nanotechnology is not only dwarfed by the global leaders, but even Bulgaria and Lichtenstein have more active centres.
-
This comment is provided by RUSSIA PROFILE org
For the full version go to www.businessneweurope.eu