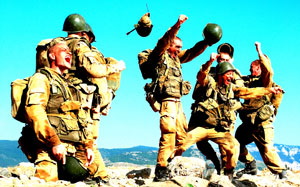 This year, box office receipts in Russian cinemas are expected to total around $560m. At this rate of growth, in 2011-12 they will pass $1bn. At least a quarter of this will be come from locally-made movies.

Three years ago Russian films accounted for just 3-5pc of the home market. But now they have reached nearly 25pc and they are likely to continue increasing. About 150 films are produced in Russia annually. Almost of third head straight for the video market, bypassing cinemas, another third goes out on limited release, and the remainder is distributed on a large scale. Many of these big movies resonate with the local audience and make almost as much cash as Hollywood blockbusters. Russian titles such as Night Watch and Day Watch, The Ninth Company, The Wolfhound and The Turkish Gambit have enjoyed unprecedented success. Another film with high expectations is the sequel to The Irony of Fate, due to be broadcast next year by its makers, Channel 1, the most popular television network in Russia and a leading film maker.

The original Irony of Fate, shot in 1975 by Eldar Ryazanov, has been shown every New Year's Eve for the past 30 years, and still draws millions of viewers. Many of them would like to see a follow-up, and the makers expect an income of no less than $40m - a record in Russia. Even though six out of the top 10 films shown are home-grown, three-quarters of annual box-office receipts are now brought in by foreign movies, primarily those made in Hollywood. European films also attract significantly large audiences in Russia. Not especially popular in Europe and America, some Russian films have nevertheless managed to bring in handsome returns from abroad. Timur Bekmambetov's Night Watch has grossed 17.9m in foreign receipts, Nikita Mikhalkov's The Barber of Siberia $7.m, Alexander Sokurov's Russian Ark $6.8m, Andrei Zvyagintsev's The Return $6.2 and the Russian-French co-production East-West, directed by Regis Wargnier, accounts for some $6m.

The most lucrative films

In 1992, Sergei Selyanov founded the STV film-production company. He has since made more than 50 movies, documentaries, and animated films, include Cargo 200 (see below).

A decade ago, distribution of Russian films was nearly non-existent. By 2003, I realised that Russian movies had discovered their own niche at home. We discussed with Goskino [the Russian State Cinema Committee] the need to promote Russian movies to cinema owners who weren\'t interested in anything but Hollywood. We told them that in 2004 there would be six or seven majors American films - and Russia would produce the eighth. That year saw the release of Night Watch, making it crucial year in Russian film history. Now that Russian films have managed to make their way onto the big screen, production and promotion costs have grown. But big-budget movies rarely recoup their investments unless they are a success. If a movie is mediocre, not to mention bad,you are bound to lose.

Ruben Dishdishyan graduated from the Yerevan Polytechnic University in Armenia. He is CEO and founder of Central Partnership, Russia\'s largest television distribution and film-making company. He was also a producer of Wolfhound (see below).

Russian cinema is undergoing an upsurge. More films are being made, and peopleoutside the industry are willing to invest, now that movies have proved profitable. The increasing number of film enthusiasts with money to spend on a screening at their local multiplex bodes well for the industry too. New investors, however, are yet to fully understand what the movie biz is all about.

They don't comprehend the difference between, say, shooting and editing costs, let alone marketing. There is a similar misunderstanding on the issue of boxoffice returns. On learning of films raking in tens of millions of dollars - a fortune in Russia - industry newcomers' heads start swimming. The fact that this income has to be divvied up among quite a few people and just a fraction is actually theirs evades them. Finally, good films are rare. Despite all these difficulties, investors are offering more money than the Russian film industry can effectively spend.

Alexander Rodnyansky
PRODUCER
Alexander Rodnyansky graduated from the film department of the Kiev Theatre Art Institute in the Ukraine. In 2002, he was named the general director of the CTC TV network. He has 17 national film awards. Rodnyaynsky was a producer of The Ninth Company (see below).

In the past few years, the Russian cinema industry has followed the path of the country\'s stunning economic growth and the resulting increase in consumer purchasing power. More and more modern movie theatres are being built. By the end of this year their number will reach 1,800-2,000. A substantial portion of financial investments currently made around Russia ends up in the film sector. As a result, several trends direct the market\'s present development. First, a contradiction exists between the traditional perception of Russian movies as an esoteric kind of art-house cinema, and the expectations of a massive young audience brought up on Hollywood blockbusters. The Western audience, whose understanding of Russian cinema has been shaped by the festival movies of Tarkovsky, Sokurov, German and Muratova, is oblivious to the existence of Russian genre films such as thrillers. Second, TV channels are filling in for nonexistent large film producers. Being the strongest media market players, they are capable of finding and retaining talent, securing property rights and conducting creative marketing campaigns on a grand scale. Last, the government support system for the domestic film industry has much room for improvement. As before, half of all proceeds go to the cinemas, and financial assistance from the state is minimal. There aren\'t nearly enough multiplexes to supply the tremendous demand for more seats. In the end, blockbusters have an enormous advantage on the market, while high quality Russian films are confined to a narrow distribution and modest sums of profit. The market is likely to balance out in next few years. High quality will allow Russians films to retain a decent market share of 25-35pc.