DOG-WALKING - A GATEWAY TO WISDOM 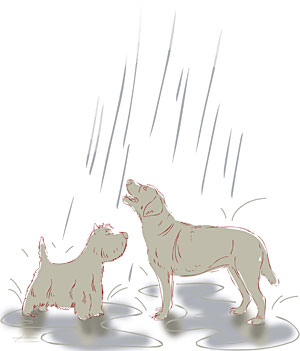 I don't like Labradors. I find them placid and rather bumbling. But then Vladimir Putin likes them. He often takes his Labrador, Connie, to various televised events. Russia's citizens like Putin, and that's probably why there are a fair number of Labradors on my neighbourhood streets. My favourite breed is the small but brave and proud West Highland White Terrier. My Westie, Nox, doesn't share my views; he prefers Labradors, although his relationship with one of them, Achilles, is rather strained. As soon as Nox sees Achilles, he starts to wag his tail and squeal with joy, but he expresses his joy by clamping down on his friend's drooping muzzle and ears. The Labrador usually endures this with good humor, although sometimes he growls. If he gets truly angry some day, he could bite my dog in half in an instant.
The owner of the Labrador is a retired police captain. Of the dozen or so members of our informal dog-walking club, he's the only one who talks about politics. His politics come down to the belief that life under the communists was better. We don't agree, but we don't argue either. We respect each other's right to have different opinion.
For us veteran dog owners, the Communist period is remembered as the time when pet shops sold only leashes, collars and muzzles, and that to make sure puppies got all the vitamins essential for healthy growth, you had to grind up egg shells and chalk and mix them into thoroughly boiled oatmeal. Today you can find all the premium brands of dry and canned pet food on just about every corner. Most of the time our group discusses apolitical topics, like the best kind of doggie rain suits, or the most effective brand of tick repellent.
The soaring number of Yorkshire Terrier owners maintain their distance from us. An entire industry now produces clothing (including mink coats) and accessories (collars with precious stones among other things) for this breed, even though most of the time the owners carry their dogs instead of walking them. There is even less to discuss with them than with the retired cop.
There was one period in my life when I didn't have a dog. During the difficult 1990s, the years of liberal reforms, life was so hard that I couldn't bring myself to take on responsibility for another living creature. But that was also the time when the streets were filled with people walking Rottweilers, Pitt Bulls and Staffordshire Bull Terriers.
Today companion breeds are popular. In my neighbourhood, Dachshunds are the most plentiful, followed by Labradors and Golden Retrievers, although there are more and more West Highland and Scotch Terriers.
No matter what the differences between the totalitarian and democratic eras, one thing remains constant. Both then and now the authorities have demanded that we walk our dogs in specially marked areas and keep them leashed and muzzled. And both now and then we walk our dogs wherever they want and think that leashes and muzzles are a form of cruelty to animals. The authorities can't order us around. But we do secretly wish that the owners of fighting breeds would become more law-abiding.