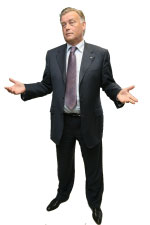 RZD is one of the world major transport companies and the largest railway in total length of tracks. But technologically, RZD is way behind its rivals. Now it has ordered new trains, and has plans for high-speed routes. At a business luncheon at the office of Rossiyskaya Gazeta RZD's President, Vladimir Yakunin, talked about his plans.

Sochi's winning bid to host the 2014 Winter Olympic Games is still a hot topic in Russia. The infrastructure needed to make them a success includes a smooth running transport system. So the interview began by discussing what plans RZD had for the Games.

"Our company will provide a rail link between the centre of Sochi and the airport," said Yakunin. "This year we will start drawing up estimates. The company will invest 60m roubles ($2.35m) in the project's development. We are now negotiating financing terms with [Russia's] National Olympic Committee."

With a sub-tropical climate, the Black Sea resort of Sochi has about 2m visitors every summer, but getting there by train, especially from Moscow in the centre of the country, is not very convenient. Trains take around 30 hours to cover the 1,500-mile route, because the track passes through mountainous terrain. Yakunin hopes to cut the time in half.

"We are planning a highspeed service on some sections of the Moscow-Sochi line," he said. "We will probably establish high-speed travel between Kursk and Orel [two cities in central Russia en route]. That will shorten travel time to Sochi to 15 hours. A passenger who boards a train in Moscow in the evening will arrive in Sochi at 11am the next day."

Any further reduction in time is not considered wise, Yakunin said. "It is impossible to maintain a speed of 567 kilometres an hour - as French trains do - throughout the entire journey because it would add enormously to the cost of the project."

The Moscow-Sochi route is among the most popular with Russians, especially in summer. But the Moscow-St Petersburg line is undoubtedly the most popular. It's on this route that Russia's only highspeed train, the R-200, operates, on the daytime Nevsky Express. And it is here that the new Velo RUS trains, being built by Siemens in Germany, will run.

Although the number of trains plying between Moscow and St Petersburg has increased, they are still always filled to capacity. Perhaps one of the reasons is the shorter time en route: 8-8hr 30min at night and 4-4hr 30min by the daytime express.

Some passengers like to travel at night, Yakunin said, explaining the company's marketing strategy. Eight hours is more than enough for them: they have time for a chat with a fellow traveller and a cup of tea before going to bed. They arrive in St Petersburg or Moscow in the morning before office hours. Another category of travellers prefers the Nevsky Express, which departs in the daytime.

Other high-speed rail links are planned. "We consider them a competitor to passenger airlines," Yakunin said. "We want to win over air travellers. That's just good business."

But High Speed rail plans have been on the drawing board before, often meeting the buffers. There have been plans for a high-speed link between Sochi and Moscow and on to St Petersburg and Helsinki for a long time.

And the High-Speed Rail Company, set up in the 1990s, is now bankrupt. But Yakunin is certain he can make the service profitable.

A close look at the country's transport links has found 18 major lines where highspeed travel is feasible, the RZD head said.

They run to and from such transport hubs as St Petersburg, Moscow, Krasnodar (the region where Sochi is located), Samara (central Russia) and Novosibirsk (Siberia). By 2010, these lines are expected to carry 10pc to 13pc more passengers than in 2004.

The company, however, has its work cut out. For several years now, Russia has been studying Europe's experience. Its first low-cost airline has now appeared and will soon be followed by another. These are tough rivals. If high-speed trains had come to Russia at least 10 years ago, they would have cornered a sizeable part of the market. But time was lost, and now they will have to jockey for it.

In the 1970s, Russia led the world in high-speed travel, although the Japanese had faster trains than Russia's R-200. "Unfortunately, circumstances have held our country back," Yakunin said. In Europe today, highspeed rail traffic is the rule. "We are now fast approaching the time when passengers from Russia will be unable to go further west without changing trains because our rolling stock is outdated and stuck in the 1970s," the President said.

And this is not just a matter of prestige. It is mostly about global competition in transport.

RZD has signed a 276 million euro contract with Siemens. It provides for the delivery to Russia of eight Velaro RUS high-speed electric trains. On July 20, in Krefeld, the Germans began making cars for them. Two more contracts have been signed with Italy's Finmecchanica and France's Alstom.

But it is not the RZD President's intention to merely buy Western equipment.

"We are making every effort to move production to Russia rather than just purchase Western technology," he said. "I want to draw Western companies with their technologies into joint ventures in Russia. This is the only way to make these technologies Russian."

The railway boss
VLADIMIR YAKUNIN graduated from the Leningrad Institute of Mechanics as a mechanical engineer in 1972. Between 1985 and 1991, he worked in the USSR's Permanent Representative Office at the United Nations. In October 2000, he became Deputy Minister of Transport; and in February 2002, First Deputy Minister of Railways. In October 2003, the board of Russian Railways appointed him the company's first deputy president. He has been President of Russian Railways since June 2005.

Dossier on Russian Railways
TRAVEL SPEED
The trains Russia has ordered for its high-speed lines can travel up to 250 km/h. They will cut travel time between, for example, Helsinki and St Petersburg from 5.5 to 3.5 hours.

RZD
Russian Railways (RZD), which was set up in May 2003, combined 987 organizations previously administered by the Ministry of Railways. The company is 100pc government owned.

1,2 M EMPLOYEES
RZD is one of the biggest railway companies in the world with 85,500 km of track and 1.2m employees.

PARTNERS
The Velaro RUS trains for the Moscow-St Petersburg line are built by Siemens. A French company, Alstom, has won the tender to build trains for the St Petersburg- Helsinki route. RZD has also signed an agreement with Italy's Finmeccanica to develop a highspeed regional train.

1.The world's biggest
Russian Railways operate 85,500km of track and have 1.2m employees. Almost 1.3bn journeys are made on them annually and they carry 1.3bn tons of freight. The railways account for more than 3.6% of Russia's GDP.

3.Charter capital
1,535.7bn roubles ($60.46bn), consisting of ordinary bearer shares with a nominal value of 1,000 roubles each. The Russian Federation is the sole shareholder of Russian Railways.

42,3 thousand kilometres
of electrified track make it the largest rail network in the world.

200 billion roubles
($ 7.87bn) were invested by the company in development and modernisation in 2006