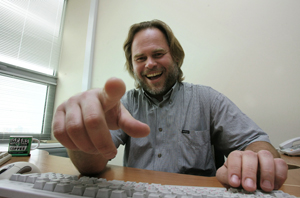 The Russian authorities view information technology (IT) as a reliable means of diversifying the economy, which until now has largely been subsidised by mineral exports. The state has invested substantial financial resources into hi-tech sectors,and President Vladimir Putin has expressed a desire to see Russia becoming a leader in the global hi-tech market within eight years.

On July 25, a Russian Security Council meeting in the Kremlin chaired by President Putin approved a development strategy for the national hi-tech business. The President told delegates: "Russia has the ability to become one of the world\'s IT leaders by 2015." Leonid Reiman, Russia\'s IT and Communications Minister, said that implementing this strategy should propel Russia from its current 52nd place into the world\'s top 20 IT countries by 2015, and into the top 10 in terms of public and corporate access to IT products. According to Reiman\'s deputy Dmitry Milovantsev, Russia\'s IT market accounted for some $13.7bn in revenue in 2006, compared to $10.7bn the previous year. This constitutes a mere 1pc of the global IT market, which has been estimated at $915bn, yet Russia\'s IT market has more than doubled in the past four years. Andrei Bogdanov, chief telecommunications analyst with the Troika Dialog investment company, predicts that Russian IT companies will grow by an average of 21pc in the next few years.

Owen Kemp, Hewlett Packard\'s vice president and managing director in Russia, agrees with analysts\' estimates that the Russian IT market grew by 20pc in 2006. He said it was a record growth compared to other countries.

Russian market players are even more optimistic. Dmitry Loshchinin, president of Luxoft, a Russian developer and exporter of software, thinks the market will grow by 40pc annually. Milovantsev believes that 2006 was also a record year in terms of investment in the Russian IT market. he said: "In 2005, Russian and foreign investors channeled $700m into Russian IT companies, while in 2006 foreign investment alone approached $1bn." The Russian IT and Communications Ministry has designed IT parks as a means of establishing the infrastructure for innovation-based development of the country. First Deputy Prime Minister Sergei Ivanov hopes that residents of IT parks will be established in seven Russian regions will produce more than 100bn roubles ($3.9bn)worth of goods by 2011. Last year the Russian government approved a programme for establishing IT parks and allocated more than 8bn roubles ($312.5m) from the federal budget over the following four years.

Local authorities are expected to provide matching contributions, while private investors may supply about 125bn roubles ($4.9bn). IT parks are now being established in the Moscow, St Petersburg and Nizhny Novgorod regions, in the Volga republic of Tatarstan, in the Kaluga region in central Russia and in Siberia\'s Novosibirsk and Tyumen regions. The IT Park in Novosibirsk is one of the most advanced. "We are past the planning stage and are ready for development," said Igor Sorokin, director of the park. He said the project was worth 20bn roubles ($781m), with the federal budget and the Novosibirsk Region\'s budget providing 1bn roubles ($39m)each.The remaining 18bn roubles are expected to come from a private investor. The IT community has embraced the idea of IT parks and welcomed the government\'s assistance to the IT sector. Owen Kemp believes that the Russian government\'s support for the sector is evident. The establishment of IT parks and venture funds with state capital makes the Russian hi-tech market more attractive to foreign investors, he says. Andrei Bogdanov believes that increased state support for this sector may create a viable alternative to energy exports.

A survey conducted by the Russian pollster Levada-Center in July showed that 25pc of Russians own a computer. In Moscow, about 40pc of families own computers, in small towns and villages the figure drops to around 5pc.