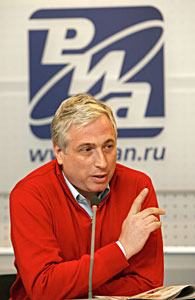 In 1924, Grigory Zinoviev's signature - or rather his forged signature - provoked a political crisis in Britain and turned the UK and the USSR into enemies. Zinoviev headed the worldwide communist movement when revolution seemed imminent everywhere. His army of Comintern agents used Soviet money to foment uprisings all over Europe.

After 1917, Vladimir Lenin made his longtime revolutionary comrade Grigory Zinoviev a member of the ruling Politburo and put him in charge of the Third Communist International, which united all the communist parties of the world. This was a key position: Zinoviev's task was to oversee the international communist movement that planned to convert the whole world to its beliefs. Zinoviev's name is associated with one of the most amazing and still unsolved mysteries of the 20th century, the "Zinoviev Letter" that tore Britain apart.

In January 1924, Ramsay MacDonald, leader of the Labour Party, became Prime Minister. One of his government's first steps was the de jure recognition of the Soviet government, which was negotiated with Christian Rakovsky, the Soviet charge d'affaires in London. Moscow was desperate for a loan, and the Labour government was ready to extend a line of credit to the Soviets to buy British-made goods that they needed. But the British government demanded that the Soviet Union first repay the debts it had inherited from the tsarist government. Initially, the Bolsheviks categorically refused, but since they had special hopes for Britain, they eventually made concessions. The Soviet government agreed to pay compensation to the British bearers of Russian bonds, after which the Labour government would sign a treaty with Russia and conclude a trade agreement.

Extracts from the Letter:
"(...) From your last report it is evident that agitation-propaganda work in the Army is weak, in the Navy a very little better...
It would be desirable to have cells in all the units of the troops, particularly among those quartered in the large centres of the
county (...)

"(...) The Military Section of British Communist Party, so far as we are aware, further suffers from a lack of specialists, the future directors of the British Red Army. It is time you thought of forming such a group, which, together with leaders, might be, in the event of an outbreak of active strife, the brain of military organization of the Party (...)"

Once Moscow had paid its debt, it would receive a loan backed by the British government. These proposed negotiations with the Soviets so enraged the Conservative opposition that they demanded that the Labour government step down.
MacDonald treated these demands as a matter of confidence in his judgment, and in the House of Commons called for a general election. The next day British intelligence gave the Foreign Office a copy of a secret letter signed by Zinoviev. The letter called for British communists to prepare for an armed prising:
"From your last report it is evident that agitation-propaganda work in the Army is weak, in the Navy a very little better... It would be desirable to have cells in all the units of the troops, particularly among those quartered in the large centres of the country... The Military Section of British Communist Party, so far as we are aware, further suffers from lack of specialists, the future directors of the British Red Army. It is time you thought of forming such a group, which, together with leaders, might be, in the event of an outbreak of active strife, the brain of military organization of the Party."
On October 25, just five days before the elections, the letter appeared in the Daily Mail. The British handed Rakovsky a note of protest, and the charge d'affaires cabled Moscow to find out how he should reply.

Secrets of the Comintern

Zinoviev insisted that he hadn't written the letter. He wasn't lying. Unclassified documents show that Moscow was truly at a loss: no one knew anything about the letter. In fact, the Soviet leaders wanted to find the person who wrote it.
At the Politburo meeting on December 18, 1924, they asked "the person who sent the Zinoviev Letter to make himself known". In return, the person who owned up would be guaranteed safety and immunity".
To expose the forgery, the Soviet leaders even let foreigners into their secret archives. In November 1924, a delegation of British trade unionists arrived in Moscow, and in May 1925 they published a report which stated that they had studied the minutes of the Comintern executive committee and hadn't found any sign of anti-British activities. They concluded that the letter was fake. Of course, the British trade unions hadn't been given access to everything. Aino Kuusinen, wife of one of the Comintern leaders, decades later described the visit: "Otto Kuusinen decided to remove materials that compromised the Comintern. Only after that did he let the English look at `all' the papers concerning English affairs. They spent three entire days and nights taking out all the compromising materials. They even rewrote the correspondence ledger..."
The Comintern did have something to hide. The Bolsheviks were preparing a world revolution and were doing everything they could to incite uprisings in Europe. After an unsuccessful attempt to incite an armed rebellion in Germany, they sent arms to Bulgarian communists to overthrow the government in Sofia.
On March 26, 1924, Zinoviev signed a memorandum on the short-term activities of the British Communist Party, and there wasn't a word about arming revolutionaries or organising an uprising against the British government. On October 11, 1924, the Politburo decided to allocate an additional 50,000 old roubles to the Comintern executive committee for work in Britain. But the funds were to be used for a communist newspaper, not arms.
The trade agreement with Britain and the expected loan were a hundred times more important than world revolution. Unclassified documents from the Comintern show that Moscow was very pleased with the agreement and hoped that it would be ratified. They were hoping for the victory of the Labour Party in the elections. The last thing Moscow would have done was send British communists a letter calling for armed struggle.

In the autumn of 1924, the Zinvoviev Letter had been given to the head of MI6 operating in Riga. On October 2, he sent the letter to MI6 headquarters in London with the note: "The authenticity of the document is undoubted." His conclusion was extremely hasty. He hadn't double checked the letter's provenance. London intelligence didn't appear to have asked their Riga office how the letter came to them and what language it was written in - Russian or English. The Zinoviev Letter was quickly sent to government leaders, the armed forces and special services.
The British Foreign Office protested to the Soviet charge d'affaires without proof that the document was authentic. The head of the Northern Department of the Foreign Office, J. Don Gregory, sent Rakovsky the notebefore he had received permission from Prime Minister MacDonald. At the time, Gregory had an expensive mistress and an empty bank account. After the Zinoviev Letter was published, his finances improved dramatically. Researchers believe that newspapers paid Gregory for the text; it was rumoured that one of them paid him ?5,000.
The British military and special services took seriously talk of an armed communist uprising. Afraid of revolution, they wanted to use the Zinoviev Letter to fight against the Communist Party and the Labour Party, whom they didn't trust. A copy of the Zinoviev Letter fell into the hands of Conservative politicians, who saw it as a priceless argument in their political battle with the Labour Party. They used it to start a political scandal that would destroy the party. In the run-up to the elections, the Conservatives accused the Labour Party of collaborating with Russian communists to overthrow the British government.
Of course, the letter itself didn't topple the Labour Party. But it unquestionably affected the mood of the voters. At the election Conservatives came to power and the country's policy changed. The Anglo-Soviet trade agreement wasn't ratified and relations between the two countries worsened.

The trail leads to Riga

For decades Labour leaders tried to discover the provenance of the letter. Labourites were certain that it had been the work of the Conservative Party and the special services. When Tony Blairbecame Prime Minister, the now deceased Secretary of State for Foreign and Commonwealth Affairs, Robin Cook, to whom the intelligence services traditionally report, ordered that the archives be opened to historians in order to solve the mystery once and for all.
When the letter originally appeared, the heads of British intelligence had insisted that the document was authentic and said they had received it from an agent who worked in the secretariat of the executive committee of Comintern and had access to secret documents. He supposedly copied the letter directly from the Russian original signed by Zinoviev. But the British didn't have an agent in Moscow.
At the time, MI5 was tracking Bolshevik propaganda and subversive activities in Britain, MI6 was following the situation in the Soviet Union, and former intelligence agents freelanced by providing
operatives with information from a variety of sources. Most of the information came from Russian emigrants, who had a rather vague sense of what was happening in the USSR. They often gave the foreign intelligence services clever forgeries.
There were several skilled emigre groups in Berlin that made these forgeries. The
English special services wouldn't have accepted the Zinoviev Letter if it had come from Berlin, but Riga was another matter. A good deal of information about what was going on in the Soviet Union, both authentic and forged, made its way to this Baltic city. The head of British intelligence operations in Riga trusted the people he worked with. But these were former officers in the White Army and mercenaries who sold their services to the highest bidder. Evidence indicates that the Zinoviev Letter was made by one of them.
After so many years it is impossible to say who wrote the letter. The forgers wanted to make money and disrupt Anglo-Soviet relations. They succeeded in both.

About the author
LEONID MLECHIN
Russian writer, historian and television presenter. Among his many books are 'KGB Chiefs: Unclassified Lives', 'Service in Foreign Intelligence'. 'The Most Famous Operations of Soviet Intelligence','Andropov' and 'Ministers of Foreign Affairs: the Kremlin's Secret Diplomacy'