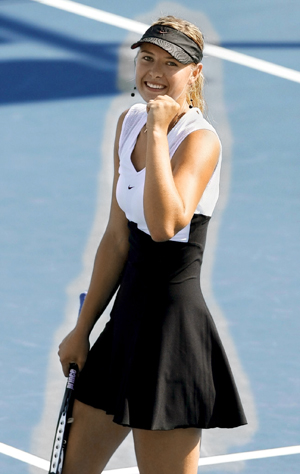 'You know, when I hear the fans yell "Masha" rather than "Maria", I'm overwhelmed with emotion. I understand that Russian people call me by that name and that's great!'

Maria Sharapova is in the spotlight once again. Known as "Masha" in her home country, she is Russia's top and the world's number two female tennis player, so it is not surprising that she often finds herself subjected to media scrutiny. However, the present controversy is not due to the fact that she is the world's highest paid female athlete, nor the fact that she was awarded multi-milliondollar contracts after winning Wimbledon in 2004 and the US Open in 2006, and not even because she is one of the most charming and attractive young women both on and off the tennis court.

The issue that frequently comes up in Russia is Sharapova's repeated refusals to play for the home team in the Federation Cup, the biggest team competition for women's tennis. Despite her valid excuses for bypassing the tournament, the press won't let her off the hook.

Last January, she told Rossiyskaya Gazeta: "I'm willing to play. I have always said I want to play for Russia. As a kid, I was always excited to see the Russian flag at the Olympics. Last year, I was not physically ready for it, but now I am."

On the evening of last month's Federation Cup semifinals against the Americans in Vermont, she was asked: "Won't your decision to play for the Russian team be influenced by the fact that Russia is competing against the country where you live? Evil tongues claim that your American agents will never let you play against the United States."
Masha replied: "Oh no! It's just the opposite. I'd be thrilled to play. It's better for me - I wouldn't even have to fly far. Only one thing can stop me: recommendations from doctors who will scan my shoulder."

But Sharapova neither came to Moscow nor played in the July semifinals against the Americans. She was put on the team sheet but then claimed she could not play because of her injured shoulder. (In the event, the Russians won, and will play Italy in the final in Russia next month.)

The international press was also wondering whether Sharapova will play for Russia in the 2008 Olympics in Beijing. In Russia, Masha has been accused of selfishness and of putting her personal interests before those of her country, and some commentators believe the tennis community has declared war on her.

Masha is upset by this. "It is important to me that people realise that some reports about my status with the Russian Fed up team during the the run-up to the tournament are false. Here are the facts:

"I have been in contact with Shamil arpishchev [President of Russian Tennis Federation] through my father who is in Moscow, and he has assured us that he was misquoted by some of the Russian media. He never said that I would not be invited to the final. He repeated that I am always invited to play for Russia.

"I have told Shamil and the Russian Tennis Federation that I will make myself available to play in the finals if they need me. My injury created a problem, and I understand and respect that many of my Russian team-mates who competed in the first two rounds should get the first chance to play in the finals. I told Shamil that I would respect his decision on the players he chooses for the finals. I congratulate the players on the recent victory and, whether I am chosen to play or not, I will be cheering for Russia."

5 firsts on the ladder to fame

2 First coach
Yury Yudkin from Sochi was her first coach. In the 1960s, he taught the first man in space, Yury Gagarin, to play tennis.

3 First spotted
Martina Navratilova, the Czech-born American tennis star, encouraged Masha's tennis career. She saw the little girl at a contest of young talents in Moscow and advised her parents to take her to the Nick Bollettieri Tennis Academy in the United States.

4 First dollars
When Yury Sharapov arrived in the United States with his daughter, he had a mere $200 in his pocket. Some claim he had $700, but does it really matter?

5 First in footwear
The tennis shoes with gold inlays made especially for Sharapova for Wimbledon in 2005 cost about $900.

"Of course, America has had a lot of influence on me. I've lived here since I was seven. I have many friends in the US. But I'd like to visit Russia more often."