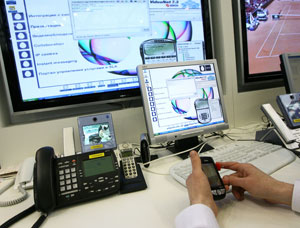 Mobile Skype
An embedded voice engine, developed by SPIRIT DSP, allows mobile phones and even office exchanges to take advantage of IP telephony and save on inter-city and international calls. The technology is already being used. Experts suggest that if this technology is introduced in mobile communications, roaming costs can be reduced to zero, in the same way that Skype has done away with payments for international land-line communications.

Convenient mobile site
Anybody attempting to display a standard Internet website on the screen of their mobile phone may get frustrated, because the present display quality of classic websites on small screens is inadequate. A programmer who is instructed to develop a mobile version of a site can also feel frustrated by the limitations. The Bemobi Company has now produced an assembly kit that lets users quickly build websites for viewing with any device - desktop computers, PDAs, smartphones and conventional cellphones.

Send us your bills
When you are billed for a service, in all likelihood the Russians participated in the process. CBoss is a major producer of billing systems, and is one of the largest in the world among mobile operators. As many as 1,200 companies globally use CBoss products. Outside Europe, the company has been selling in Asia and Africa for the past year, and this year it is planning to enter the Latin American market.

Off-shore programming
Microsoft's Bill Gates is pictured above on a recent visit to Moscow. Large multinational corporations have long known that Russians make good products, but they can't sell them and Microsoft is just one company to open software development offices in Russia. Others include Alcatel-Lucent, Borland, Hewlett-Packard, Huawei Technologies, Iskratel, Intel, LG Technologies, Nortel, Siemens, Sun Microsystems and T-Systems. Motorola already has more than 560 employees in St Petersburg, while the high technologies centre opened by Sun Microsystems, also in St Petersburg, has 300 programmers on its payroll. Intel employs 1,100 engineers and software developers across Russia in Nizhny Novgorod, Moscow, Novosibirsk and other cities. In June T-Systems, a subsidiary of Deutsche Telekom, opened a centre for testing and developing software and the number of its employees is expected to reach 400 by next year.

Spreading anti-virus
The Kaspersky Lab is among the world's top 10 companies providing software to protect information from cyberspace attacks and is frequently in the news. Owned by Yevgeny Kaspersky (pictured top left), the Moscowbased company has regional offices in the UK, France, Germany, the Netherlands, Poland, Japan, China, Korea, Romania and the US. It also has a large partner network involving more than 500 companies globally.