When a little paranoia is good for you 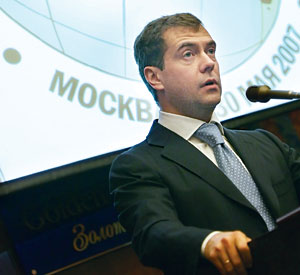 "When people from the Georgian and Ukrainian television meet, which language do you think they use?" asks Natalya Ivanova, director of development at the Eurasian Academy of TV Broadcasting. The answer is: Russian. And it is true not only for journalists, but for all professions, from diplomats to truck drivers.

Indeed, Russian language is one of many things that still tie together the countries of the former Soviet bloc. Just like the old TU jet that the Polish president uses for foreign visits, it is reliable and user-friendly even if it is not quite in fashion in some places. I remember how at an international conference on post-Soviet space, held in Riga, people scrambled to express themselves in English during the panel discussions, but switched to Russian in the cafeteria. "I am also a Russian-speaker," a local journalist from Latvia's Diena newspaper said sourly, mocking Moscow's attempts to protect Russian speakers in Latvia from discrimination. "Does the Russian government think I need protection?

Indeed, it does. Because this person, whether he wants it or not, is part of the Russian-speaking world. If his children do not speak the language that can make them feel at home from Kaliningrad to Mongolia, for them that will be a loss . So, a journalist from Diena indeed needs protection - against forgetting. In the same way we need protection from forgetting Latvian music and cinema, that used to be highly popular in Soviet times.

The concept of Russian world (russkiy mir), ushered into the public sphere by President Vladimir Putin in his State of the Union speech in April, came into being at the right moment. Never before we were more concerned about the state of our language. Not only school teachers, but even taxi drivers complain about the "contamination" of the language by Internet Newspeak, criminal jargon and plain swearing. Never before have we heard more about the "retreat" of Russian in all Eurasia.

Luckily, paranoia can sometimes be helpful. Concern about the state of the language led to renewed attention to the problems of teachers of Russian, especially the ones living abroad. President Putin promised to create the National Russian Language Foundation, which would promote Russian language and culture all over the world. And the First Vice-Premier Dmitry Medvedev at a conference in June made an official estimate of the number of Russian speakers in the world: 274m. Not bad for a "retreating" language.