Russia and China through the American Lens 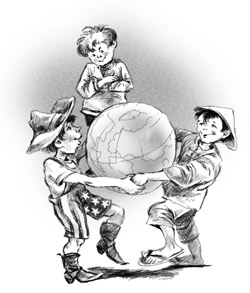 By the end of President George Bush's second term, a stark paradox arose in American foreign policy. The government's relations with communist China improved, while tensions with Russia built up, despite the latter having a far more open and pluralistic political system. This is all the more surprising in light of the fact that China, and not Russia, is capable of becoming the U.S.'s rival in the international arena of the 21st century. While Washington's relations with Moscow have usually been fine-tuned in accordance with Russia's movement towards a liberal democracy and behavior on post-Soviet territory, the Bush administration has not used such criteria for moving forward U.S.-China interactions. Instead, the administration has striven to turn China into a "responsible stakeholder" in world affairs.

The reasoning behind this situation can be found in Americans' high and apparently unrealistic expectations of Russia in the 90's. American politicians and experts assumed that Russia would gradually follow the model of Central European governments. Moscow, however, continued to drift away from the West in both domestic and foreign policies.

Unlike Russia, which Americans wanted to see as a country much like their own, China is regarded by the American political community as "different." From Washington's perspective, someone "different" has the right to practice "incorrect" domestic policies and politics. U.S.-China contradictions on the international arena seldom lead to crises in their relationship. Generally, China, has managed to reach a more level and pragmatic connection with the U.S. than Russia has been able to achieve.

Impressed by China's success, proponents of the "Chinese model" of relations with the U.S. have become more vocal in Russia. However, it is necessary to consider what downsides there are to such a model for Russia.

Following China's path, Russia would have to be ready to sacrifice any sustained and meaningful dialogue with the West in context of the G8, institutes of the EU-Russia cooperation, the Russia-NATO Council, and, possibly, with other structures such as the Council of Europe and OSCE. This would be unwise. The value of Moscow's adjustments to Western international practices in these institutions is often underestimated by Russian politicians and experts. It would be reckless to trade in the fruits of successful adaptation to greater responsibilities for dubious freedom in foreign policy maneuvering.

Unlike Russia, China sees no direct benefits in institutionalizing political dialogue with the West. China and the U.S. try to avoid mutual criticism; however, it is likely that they are on the way to actual mutual containment. Aggressive rhetoric towards China usually fails to give American politicians additional financial backing or more votes. However, among American military and intelligence communities, where planning exceeds four-year terms, concerns about China's action runs deeper than in political spheres.

Despite all differences between Russia and China, Moscow could learn from Beijing the art of sophisticated public diplomacy. According to public opinion polls from 47 states, in 2007 China had an overall positive image in 27 countries, while Russia was viewed in a positive light in merely 14 countries. Regardless of serious internal socio-economic problems, in the international arena China projects an image of a confident country that strives for "a harmonious world."

Russia has a much greater chance than China to a reach partnership with the U.S. and the West in general without losing its own uniqueness and independence. Although China has thus far made greater achievements than Russia in this area, Russia could take the lead by finding its own path between the "Chinese model" of relations with the U.S. and the fate of being America's "junior partner." There is much greater room for maneuver between these two options than is evident to the naked eye.