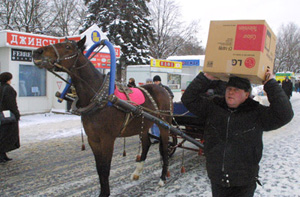 The dominant opinion about Russia's upcoming parliamentary elections is that the story has been written and the result is a foregone conclusion.

But not everything is so simple-there are outside forces which may interfere: the global economy may have an effect on Russian voters.

Despite a mortgage crisis in the United States and unsettled world financial markets, most experts do not expect much trouble for Russia. There will be problems with heavy borrowers and banks, but no one thinks it will lead to a disaster.

Russian authorities think the stock market will remain steady and go up by the end of the year. Grassroots IPOs must not suffer; they are important politically and electorally: both Vneshtorgbank and Rosneft have more than 40 percent of shareholders over the age of 50, and this age group is always active in the elections.

The Russian market of consumer credits and mortgages is also unlikely to be hit by the global downturn. According to Central Bank figures, the average per capita debt to banks was just over 14,000 rubles ($553), while mortgage loans totalled an average of 2,000 rubles ($79) per person, even taking into account the runaway growth of 2007. Typically, Russians tend to repay mortgages quickly and ahead of time. The population is not over-credited and there is no risk of a market downfall. The only possible negative development is that requirements for mortgage applicants may get tighter and high interest rates may slow down. Early repayments will become more rare, and banks will benefit. Such a development will not contribute to the easy availability and popularity of mortgages, but it will be short-lived, because a real mortgage boom in Russia is still ahead.

On the global financial market, the main problem is to assess the sentiments of investors, which are highly unpredictable. In Russia's electoral politics, the same factor may play a role.

Economic growth and the consumer boom have been at the heart of Russia's political stability. The desire and the ability of many to improve their standard of living and enjoy the good things in life have contributed to a degree of political indifference in society. Easily available and affordable bank loans have focused interest on making money and paying off debts. The catchphrase today is: "Politics? No time for it."

The first to adopt this philosophy has been the middle class, which is politically indifferent and is not very eager to go to the polls. What is more, according to the Public Opinion Foundation, 59 percent of those surveyed are sure that the results of the future Duma elections will in no way affect their lives and therefore they do not project their daily hopes on campaigning. Even if some do go to the polls, they will not think they are doing so for their own benefit.

But private consumer interest and the "depoliticized" approach call for a rapid and steady growth in production and income. It is these two factors that render society insensitive to all kinds of political issues. But it is far from obvious that the economy will meet the deep-seated demand for "mandatory welfare." The fever currently gripping the world financial markets may leave many trying to figure out how to manage on declining incomes and refinancing their debts, and could make them downscale their hopes for the future.

This may result in a change of mood. As soon as the machine satisfying consumers begins to slow down, interest in politics will be reignited, and difficult questions for the state will appear: "What will happen next?" The first symptom will be an extra 2-3 percent of voters at the polls with such questions. By then the idea that the best way to improve one's life is through the political system may capture more minds.

Having assessed Russia's rapid economic growth in the last six years, the Centre of Strategic Research has concluded that the nation is ready to join the ranks of "industrially advanced" nations - up from the "mid-developed" category it occupied throughout the last century. If the Russian economy continues to make steady progress over the next 15 years, by 2020 its GDP in terms of purchasing power parity (PPP) in 2005 prices will approach $20,000 per capita, which is common for many post-industrialized nations. Here are the main figures of Russia's best-case scenario for 2020:

Russia can only reach these goals by 2020 if it manages to maintain an annual average growth rate of 7 percent for the next 13 years. This will be a challenging task that no country has ever met. However, experts estimate that over the same period the country will be losing its workforce at a rate of 1 percent a year.