Confrontation with the West is harmful 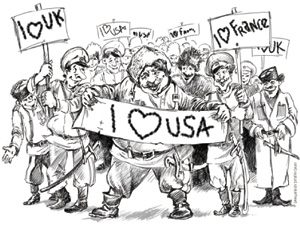 When President Yeltsin came to power in 1990 Russia was bankrupt. Oil production was falling by 54 million tons a year, and there were no grain stocks to last until the next harvest. The keynote of the Soviet government's statements in the last three years of the Soviet Union was that the situation was catastrophic.

Since then, we have carried out reforms and created a market economy - not terribly effective, but working nonetheless - and we have integrated Russia into the global market. Thereafter the Russian economy embarked on dynamic growth, and has sustained high rate of growth for nine years.

Gone is the problem of foreign debt, and our gold and currency reserves are now the third largest in the world. The main concern of our financial authorities is that they are growing too fast.

All these circumstances lend a different note to the relations between Russia and other countries, which have to adapt themselves to a reality that is very different from that of the bankrupt Soviet Union. Both we, and the world, understand that this is no reason for starting a new Cold War. Normal, correct relations need to be formed.

Russia today is an urban and literate society with a per capita GDP of over $10,000, according to purchasing power parity. We will sort out our problems and build a working democracy. But the worst thing that can be done is to lambast Russia that it must be a democratic country because that is what the West wants.

We do make mistakes. Russian society, for example, did not fully appreciate the damage done to our national interests by the unceremonious actions of the Russian authorities in Ukraine during the presidential elections in the autumn of 2004. We behaved like a bull in a china shop, oblivious of the consequences.

These days Russia's behavior is more correct and gentle. But that does not mean that the damage can simply be written off. As in the economy, there is inertia in the international community.

It has to be understood that the Russian political elite faces serious challenges. One is very real anti-Americanism. There were no anti-American sentiments in the mid-1990s, at least not among educated young people.

We must know what we are playing with. There are two countries capable of destroying the world: the United States of America and the Russian Federation. I have tried to explain to Americans that their foreign policy would bring about a groundswell of anti-American feeling amongst the educated youth in Russia. Previously, such sentiments existed mainly in small towns and in the countryside. There were no such sentiments at the Higher School of Economics or at Moscow University. Now anti-Americanism is spreading to these elite institutions, something the authorities have to reckon with. In that sense we are no different from France, where anti-American sentiments are at least as prevalent as in Russia.

For all the flaws in the concrete policies of this or that president of the United States, I believe that anti-American feelings are symptoms of poor mental health. Nonetheless, the current political leadership has to face reality; if you want to be in politics it does not pay to ignore it. Neither French elites nor Russian elites, both of which are comprised of reasonable people, seek a confrontation with the United States. They understand that confrontation is bad for the world and for their own country. Instead, a fine balance has to be struck. From a political point of view the elite must be mindful of anti-American sentiment, and it is in the interests of their countries to avoid conflicts. After all, the French are not interested in waging a Cold War against America. Neither are the Russians.

Let me stress again: whether or not we will be a democracy is our business. If you think it was the Americans who imposed democracy on us as it emerged in 1990-1991, you are mistaken. We chose this road ourselves; the Americans played a minor role in it and will continue to play a minor role. We will build a democratic society in Russia by ourselves, and certainly without directives from outside. And so will the Chinese. This is simply a matter of interconnection between the level of development in a country and its political institutions. Another, no less salient point is that in the process of post-revolutionary rehabilitation we should not become hysterical and should not feel offended by all and sundry. We should not be tempted to exploit the post-imperial syndrome.

In the last 15 years the United States has never changed its plans in order to preserve a dialogue with Russia. And that is dangerous. I often try to explain the consequences of what they are doing. When, at the technical level, I explain all this to my American colleagues, people who are well informed and involved in the process of decision-making, their jaws drop. I am not joking when I say that the approach time of a missile influences the mechanism of decision-making. It could not be further from my thoughts to believe that the Americans could strike at the nuclear weapons control centers in Russia; I do not believe this would happen for a second. But I understand how all this is seen by the Russian General Staff. Not because the people working there are foolish, but because it is their profession, and their duty, to think along these lines.

Such conversations tend to increase awareness, but I am not a magician. The fact that I talk to someone does not have an immediate impact on the official position. It does, however, often become the subject of a serious discussion.