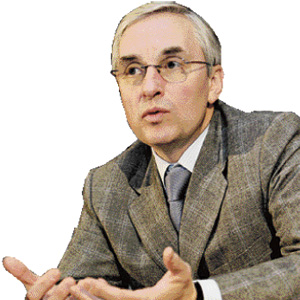 Prominent economist Igor Yurgens analyzes the uneasy relationship between the government and business community in Russia over the last few years.

"Russia can follow one of four economic scenarios," said Igor Yurgens, vice-president of the Russian Union of Industrialists and Entrepreneurs. "The first option is to live as a rentier, that is, to continue exploiting natural resources. In this case, modernization is not a problem but there may not be enough resources for everyone. If there was a change in the world balance, their redistribution would increase the risk of a serious conflict."

"The inertia scenario envisages constant maneuvering between populism, with its handouts of subsidies, and an attempt to continue reform of market institutions. It would neutralize the more serious social threats. But I believe that these three futures would mean disaster for Russia.

"The modernization scenario seems to be the best of all. It has practically no opponents in the country. But it is difficult for everyone and is a real challenge. It will take a whole generation and a long-term coalition to carry it out. The state, business community and civil society will have to work together. Without this, Russia is unlikely to see the light at the end of the tunnel."

Yurgens believes that this situation is rooted in the recent past or, to be more precise, to what is called the Putin Economic Era--the development of Russia's economy and society over the last eight years.

"At the turn of the 21st century, Russia had no president. After the 1998 default, it was just beginning to overcome a huge crisis of confidence. Still worse, global oil prices were very low. In short, the economic situation was disastrous," Yurgens said.

"After becoming president, Putin offered the still immature sectors of medium and big business a very liberal plan, which embraced free enterprise, tax breaks, protection of business from abuse by law enforcement agencies, Russia's openness and entry to the WTO. At what was dubbed a "shashlik" (barbecue) meeting, Putin, his closest associates and about two dozen major businessmen agreed on the new rules of the game. Putin said something like this: "Strictly speaking, I don't need you. I'll put state assets in order myself. I'm leaving you free enterprise and other freedoms; make money and live in peace, but don't mess with politics. Otherwise those who hate you (they were about 30% more numerous at that time) will sweep away both you and me."

"Since at that time business, especially big business, was capable of mobilizing knowledge and expertise at the highest level, the presidential administration and government officials conducted most reforms in close consultation with the owners of major companies, who were elected to head many committees. This was a great catalyst for the nation's progress. Global prices of energy and metals started growing at the same time. By 2003, Russia began to recover from the crisis."

"We should not forget the intricate alignment of political forces at that time," Yurgens observed. "Putin realized the dangers of passing between Scylla and Charybdis, that is, defeating the oligarchs with the help of communists and nationalists, while simultaneously using the oligarchs and the modernization-driven middle class and youth to keep the communists and nationalists away from power."

"As has happened before in Russian history, the state ran ahead unchecked, gradually assuming more and more powers. Now we can observe two processes. On the one hand, the state has to invest somewhere the resources under its control. But on the other hand, government management of corporations and markets is a controversial question all over the world, all the more so in Russia with its shortage of top managers and a bad record for corruption," explained Yurgens.

"The second process is filling in `market holes', a situation where the state assumes certain functions in order to resolve social problems. With the trend towards inadequate growth of the public sector of the economy, there are spheres of production where the state's intervention should be welcomed," Yurgens said. He predicts that this issue will become worse in the near future.

Igor Yurgens, 54, graduated from the faculty of Economics, Moscow State University, PhD in Economics and is the author of a number of articles and monographs.

Mr. Yurgens started his working career in 1974 in the international department of the All-Union Trades Union Committee. From 1980 to 1985 he worked in the Foreign Relations department of the UN on education, science and culture.

From 1992 to 1997 Mr. Yurgens was First Deputy Chairman of the Trades Union Confederation.

In 1996 and 1997, he was Chairman of the Board of MESKO Insurance Company. From April 1998 to August 2000 he headed the All-Russian Insurance Association.

Today Igor Yurgens is senior vice-president of Renaissance Capital, one of Russia's largest investment companies, and vice-president of the Russian Union of Industrialists and Entrepreneurs (RUIE), the nation's most influential business association.