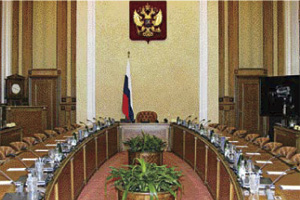 Few people would have believed in late August that Mikhail Fradkov's government would resign on September 12. But it did.

Such fast developments show that the president did not act on the spur of the moment. This is the first step in the implementation of a long-term political plan aimed at creating a new configuration of power after the 2008 elections

I believe that the Viktor Zubkov cabinet will not be transitional, although according to the Constitution the government will have to resign after the new president's inauguration. Zubkov's task is to make sure that the new president will not waste precious time forming a new cabinet. From the first day he will rely on the team that has been trained to continue Putin's policy.

Zubkov is to create this team and test its performance before next May (when Russia's next president will assume office).

Putin will form the government himself. He will endorse the ministries and appoint their heads. This shows his desire to guarantee the continuity of his policy more than the choice of a successor. Zubkov, a seasoned top manager, will translate his will into reality.

I don't want to indulge in idle speculation as to who will become the next president, but this Cabinet maneuver shows that in 2008 power may be transferred from the Kremlin to the White House. Regardless of who becomes president, during the election campaign he will position himself as ready to continue Putin's line. This is why he won't be able to give up the Putin-formed government.

Let's not try to guess what will happen when the new president consolidates power. One thing is clear: there will be no return to the situation where Putin was largely directing the government. A new formula will be found. It is important to make sure that a search for it does not develop into a behind-the-scenes struggle between different groups, that it helps the country to respond to the challenges it will face.

To begin with, Russia should orient itself in space and time in order to map out ambitious but realistic goals for the next 15 to 20 years. Russia's strong points are the presence of unique natural resources, transit position between Asia and Europe and the still-competitive workforce. But Russia should change its approach: not simply produce raw materials but engage in their in-depth processing; not simply be proud of its vast expanses but build modern transport infrastructure; not repeat the long-since-obsolete mantra about our people being the most clever and most learned of all, but transform these makings into a system of personnel training that would make them competent.

Russia should adopt a long-term program for its development rather than a package of high-sounding but totally unbinding intentions. There is no need to display macroeconomic zeal with its endless figures. We should concentrate on what we want to achieve and how. We have no choice but to make a breakthrough in the social field. Simple pumping of money won't change much. We should think of how to make a change and then increase our social spending. We should at least double the share of social expenses in the GDP, and this move may become our most effective investment into Russia's breakthrough to the future.

Russia is a federation, but this constitutional status is becoming increasingly abstract, considering that out of its 85 regions only 20 do not require regular injections from the federal budget. Abnormal centralization of tax revenues often prevents the federal government from spreading even its most progressive undertakings into the rest of the country. We have to review our tax and intra-budget policy again in order to redress this situation. I think we must establish a network of independent analytical centers which will carry weight with the government. They should offer and substantiate major decisions not only on tax policy and intra-budget relations but also on a broad range of other national issues.