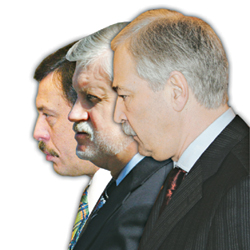 "The time of losses is over for us"

Boris Gryzlov, 56, the United Russia ruling party leader, the head of its parliamentary group and the Duma Speaker, is a classic party functionary and government top manager. He prefers to follow the rules rather than conduct his own game and display risky ambitions.

Concise, reserved and dressed in formal suits, Gryzlov is poles apart from the politicians that Russians got used to in the Yeltsin era.

This man with a clear-cut profile and square shoulders has the bearing of a soldier; he abstains from extravagant public statements and is demonstratively correct and unbiased in parliament. But he feels right at home in an official environment.

Gryzlov has worked most of his life in St. Petersburg, the home city of President Vladimir Putin. But he has never been Putin's personal friend and was not even acquainted with him before his advent to big politics.

Born into a family of a military pilot and a teacher, Gryzlov graduated from a physics and mathematics high school with a gold medal (a number of other leading politicians attended the same school) and the Leningrad Electro-Technical Institute. For more than 20 years he worked at different institutions specializing in space-based communications systems. His political career started in only late 1990s, but his ascent to power was as fast as a missile launch. By 2000, he chaired his party's group in the federal parliament.

As Minister of the Interior, Gryzlov cracked down on "uniformed turncoats" (a nickname for corrupt police officials), and a number of the ministry's high-rankers were charged with corruption and taken to court. Gryzlov headed the ministry from 2001 to 2003, when he was elected to the federal parliament again to lead the United Russia group.

United Russia has always relied on the President's ideas and prestige. In this context, Gryzlov's position of the party's leader is close to ideal. His loyalty, ability to build long-term strategies, his skill of "pushing through" decisions without causing conflicts but by way of a "persevering compromise" with opponents are all invaluable for the ruling party. Gryzlov's actions are predictable; he has not been involved in any political or other scandals and has a reputation as the party's loyal soldier.

"We are the biggest left-wing party"

Sergei Mironov, 54, is the leader of the Just Russia new party and Speaker of the Federation Council (the parliament's upper chamber). In the past year, the new party made a stride forward and has every chance of passing the 7 percent admission barrier. It even overtook the ruling party in local parliamentary elections in some regions.

As its name suggests, Just Russia targets the voters who are angry about the reforms of the 1990s and demand more social support from the government.

These are the traditional supporters of the left-wing forces. Just Russia tacitly claims the role of the second ruling party, but quite a few municipal officials support it in the regions. Mironov's party is strongly critical of the ruling United Russia and positions itself as an opponent of bureaucrats that are allegedly incapable of implementing President Putin's correct policy.

Mironov was born in St Petersburg. A geologist by education, he worked as such until the early 1990s. Today, he has five university degrees - in engineering, economics, law, philosophy and management. Mironov began his political career in 1994 when he was elected deputy of the Legislative Assembly of the city of St Petersburg.

In 2001, Mironov was elected Chairman of the Federation Council and changed it beyond recognition. This Yeltsin-era bulwark of free debates and independent decisions turned into a strictly lobbyist law-stamping instrument. Mironov is not averse to political extravagance. Some of his moves contradict diplomatic etiquette (he refused to meet with Yasser Arafat during his first trip to the Middle East). Mironov positions himself as a man from the masses even with his looks. Dressed in a business suit, he never fails to demonstrate a week's growth on his chin - like a geologist returning from an expedition. Mironov allows himself to lash out at regional leaders and federal officials. At the same time, Mironov fits well into the system of Russian government. He illustrates the idea that to rule the country effectively, the government needs a system of checks and balances and that votes should be collected from both the right and left of the political spectrum. His supporters will not prejudice national stability in any way, not even if they come to power. But their chances of getting even a third of the Duma mandates are negligible. -

"We want to influence the power"

Mikhail Barshchevsky, 51, is only starting to become famous as a politician. He has long been known as a brilliant lawyer. His Civil Force party aims at finally consolidating the right-wing liberals and getting into parliament, a goal it did not realize in the last Duma elections. Barshchevsky has rather good prospects on his political horizon.

A Moscovite, Barshchevsky is a brilliant intellectual and is the fourth generation of lawyers in his family (his great-grandfather also practiced law).

In recent years, he has represented the Russian government in the Constitutional, Supreme and Higher Arbitration Courts. But he is well known to the public at large. For a long time, Barshchevsky was participating in the super-popular intellectual TV quiz show What? Where? When? (a counterpart of the American Jeopardy). As for his professional career, he turned it into a business and set up the nation's first private law firm in the late 1980s. A number of major Russian private banks were his clients. He is well-connected in business and government circles.

In 2001, Barshchevsky became the government's official representative in Russia's higher courts. Even at that time he said that while not being a defender of the authorities, he saw the "great potential" of Putin's team.

In 2006, Barshchevsky headed the supreme council of Free Russia, a center-right party, which was subsequently transformed into the Civil Force. As a lawyer and a public figure, he fights for the civil rights and freedoms of Russia's scanty middle class rather than of the poor. Today, this image is very popular - the middle class has virtually no representatives in the government. The ratings of the right-wing parties, such as Grigory Yavlinsky's Yabloko and the Union of Right Forces, are extremely low. They have discredited themselves with endless scandals and the inability to achieve unity even among their own ranks and self-removal from power and decision-making. Against this background, the vigorous Mikhail Barshchevsky with his experience of cooperation with the powers that be, a good record of a practicing lawyer and the image of an intellectual in the Russian interpretation of this word may really suit everyone - both the voters and the Kremlin. While not a match for the latter as an opponent, he is a good alternative to objectionable rivals.