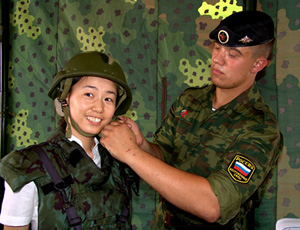 Though nominally equal partners, in reality the members of the Shanghai Cooperation Organization each play radically different roles within the organisation depending on their own power, and their vision of just what the organisation is there for.

Though nominally equal partners, in reality the members of the Shanghai Cooperation Organization each play radically different roles within the organisation depending on their own power, and their vision of just what the organisation is there for.

The regional giants Russia and China dominate the club and largely determine policy; Kazakhstan and Uzbekistan, medium-sized states with tangible but much smaller economic, demographic, military and political clout, are able to exert some limited influence over SCO policy. At the bottom of the food chain are the SCO minnows Kyrgyzstan and Tajikistan that have no such clout, and correspondingly little influence.

Russia would like to see the SCO become a military-political bloc, but does not view it as a new Warsaw Pact.

The mere lack of ideological differences with the West is enough to rule out a return to the Cold War. However, a clash of economic interests is only natural. Central Asia holds significant oil and gas reserves, which Russia seeks to control, and for this the SCO is an ideal instrument.

However, it is abundantly clear that Moscow is not entertaining the possibility of armed action beyond the borders of the SCO. It is quite probable that Beijing is not against some form of military alliance, either. But for now economic considerations deter China's leaders from quarreling with the West. For the Chinese, the significance of the SCO is overwhelmingly economic. Oil and gas are also crucial to China, but unlike Russia, it is interested in their import rather than export. The SCO is ideal for China in this respect. Every member state except Uzbekistan shares a border with China, providing secure land routes for energy imports. Today, China imports the bulk of its oil by sea from the Gulf, and, lacking a strong navy, is acutely aware of its vulnerability to blockade.

Another advantage of the SCO for China is that it is the only net energy importer in the club. Russia, Kazakhstan, Uzbekistan and later on Iran and Turkmenistan, will soon find themselves competing for the Chinese market. In such conditions the buyer will dictate the price. Moreover, China, with its powerful economy and dumping prices, easily dominates the economies of other SCO members. Finally, for China the SCO countries are also a major transit corridor to the EU.

Iran, currently only an observer at the SCO, is the chief enthusiast of the military bloc idea. Membership of such an alliance would effectively remove the threat of American aggression and make the SCO responsible for Iran's conflict with Israel. This makes Moscow and Beijing rather skeptical about Iran's full SCO membership, nor do they want to assume responsibility for its security.

The Chinese vision will probably prevail, if only because it is stronger and more pragmatic. The recent summit in Bishkek focused on economic issues. If the SCO ever turns into a military alliance, it will be at China's initiative, rather than Russia's. Russia is unlikely to see a new military bloc emerging in Asia anytime soon.

PS. The Russian city of Ekaterinburg (the Urals) will be the place of the next SCO summit meeting in 2009