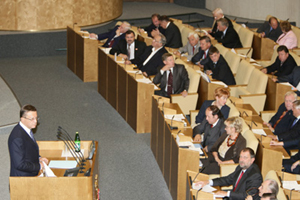 The new Russian government has not been formed yet but it has already set a number of strategic goals. Replying to questions by Russian journalists and Western political scientists at his Bocharov Ruchei Black Sea residence, President Vladimir Putin stated the number one priority.

Explaining one of the reasons for the Cabinet's resignation, Putin said: "Government members are also human; they have slowed down and started thinking more about their own post-election careers." He emphasized that he "would like to see a government working like a Swiss watch, with precision and without any intervals between March and May 2008. I want it to be a smoothly functioning body, which does not need any breaks for respite."

Observers believe that the Cabinet's effective work during the parliamentary and presidential campaigns and in the period between the presidential election next March and inauguration in May is one of the main guarantees of the power continuity.

"I think the Cabinet should give priority to the stability of national economic progress; it should make its work more effective by enhancing its members' personal responsibility. We must work better for the sake of the nation's prosperity."

He believes that the government should also focus on the anti-corruption drive.

"What can defeat Russia? Lack of professionalism plus corruption. We must adopt a law against corruption. Nobody knows what to do about it. But there is a draft law on corruption - I personally took part in its elaboration. This is the first point. Second, we must set up a special agency to deal with corruption on a daily basis. We could model it on the anti-terrorist committee, which has achieved a great deal since its establishment a year ago. Moreover, society and law-enforcement bodies should fight corruption across the board. Only then will we be able to put things in order," he said.

Having worked in the state-run agro-industrial sector for many years, Zubkov dwelt in detail on agriculture. No doubt the difficult situation in this sphere will be one of his concerns. He spoke enthusiastically about modernizing rural regions, reducing food imports and achieving major breakthroughs - a mere 2% increase in milk production doesn't count.

"I know how difficult life in rural regions is. Yes, financial subsidies have gone up three times but rural areas deserve much more," Zubkov observed. He believes that modernization of production and cuts in imports will change the situation in agriculture for the better.

Zubkov also spoke about the need to reduce inflation and taxes, create an innovation-based economy, and increase revenues from the sales of oil and gas - in short, everything President Putin mentioned in his address to the Federal Assembly. But it is already obvious that Zubkov will set priorities in the economic strategy as he sees fit.