Russia beaten at Wembley but certain of rebound in Moscow 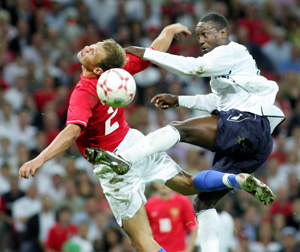 The qualifying matches in the Euro-2008 football championship have reached a decisive stage. The outcome of the match between England and Russia will decide which of the teams will pair up with Croatia to go to Austria and Switzerland next summer. The first match has gone to the founders of football.

Ahead of the London duel, the Russian team was in a strong position. It hadn't lost a single game from the eight group matches, and conceded only one goal. England was only one point behind the charges of Russia's Dutch coach Guus Hiddink, and the guests at Wembley would have been quite happy with a draw. But Hiddink said that the Russians were going to play aggressive, attacking football, and did not intend to stay on the defensive. The upshot was slightly different.

The guests entered the pitch with practically only one forward, Sychev, while Anyukov, tending to be on the defensive, took up the place of the mobile and attack-minded Bystrov on the right flank. Such a cautious alignment, according to most analysts, was the reason why the match was decided in the first half-hour. Owen took advantage of Russian defensive mistakes and scored a goal in the seventh minute. Russia was still in a position to reverse the course of the game, and even scored a return goal. But the referee called Zyryanov on a doubtful hand-ball and disallowed the goal. Not long after, the ball was in the back of the Russian net for the second time, with Owen scoring his fortieth international goal.

Hiddink tried to alter the course of the match with substitutions, but they had no effect on the ultimate result. Ferdinand got the final goal to make it 3-0. It was a defeat the Russian team did not deserve. England looked stronger, but not without flaws, and one could not say the hosts were absolutely dominant despite the scoreline.

It was a good lesson for Russia. Although the team lost, it was not the decisive game. At the post-match news conference Hiddink said everything would fall into place at the end of the qualification process.

The return match between Russia and England on October 17 at Moscow's Luzhniki stadium will be decisive in many respects. Hiddink's charges must win the game to book their ticket to Euro 2008. And they are already saying they can do it.

"The English team is not as formidable as it looks. We can play much better at home. Everyone is already anxious and eager to spring a surprise on the English side. We are very angry with the result, because the game had been going well," said forward Dmitry Sychev.

In the return match, Russia will enjoy every advantage. The synthetic pitch at Luzhniki, which the British are not used to and frankly fear, gives them the upper hand; there will be an 80,000 audience whose supporting roar will echo that at Wembley; and the physical condition of the players will be excellent - in mid-October Russian clubs are traditionally at the peak of their form, and often beat the best teams. Finally, there is the mood: England is sure to be slightly relaxed and euphoric following its two major wins, whereas Russia is going to fight tooth and nail. Hiddink's team is facing a simple dilemma: victory or nothing. In such a situation there is always hope for something special.