Who is Viktor Zubkov? 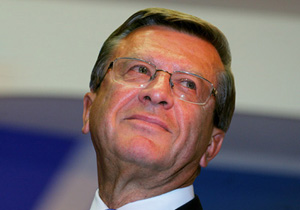 Viktor Zubkov, born in 1941 in the village of Arbat in the Sverdlovsk Region (the Urals), worked as a fitter at the Monchegorsk plant from 1958 to 1960. He graduated from the Leningrad Agriculture Institute with a degree in economics. 1967-1985: manager in state farms of the Leningrad Region. 1985-1986: chairman of the Priozersk city executive committee.

Zubkov was on the team of Mayor Anatoly Sobchak until 1993, holding the post of first deputy chairman of the public relations committee headed by Vladimir Putin.

Married. His only daughter is married to former Defence Minister Anatoly Serdyukov.

Residents of the Razdolye village about Zubkov:

Viktor Zubkov worked for nearly 11 years as director of a state farm in Razdolye, a small village in the Leningrad Region.

"He was a young man, under 30, when he came to the village," said Lyudmila Lapina, former livestock specialist there. "He was a handsome man, but, unfortunately, already married with a child."

"He formed a team of young specialists, inviting university and college graduates," she said. "We had a new agronomist and a vet. Viktor himself doubled as economist and accountant. We have already toasted his appointment [as prime minister]."

Anna Minayeva, Zubkov's secretary, said that he was a perfectionist. He hated disorder, and there were only clean sheets of paper and a pen on his table.

Zubkov was especially fond of Yuletide. According to the villagers, on that day Viktor and his wife, Zoya, dressed as mummers and went to the village with their friends, singing Yuletide songs.

"We coasted for hours until we were drunk with fresh air, and then went to the Zubkovs for dinner," said Lapina, smiling. "Viktor loved to cook. I still remember his superb pancakes!"