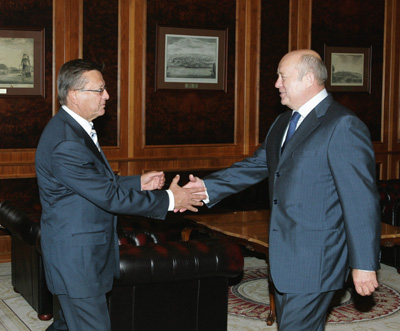 Resignation of cabinet in any country is likely to cause social and economic upheaval. Not so in Russia, or at least not this time around.

The resignation of the Russian government in mid-September is an event that has to do mainly with the upcoming change of the Kremlin's incumbent. Obviously, with six months to go before the presidential election, there can be no question of changing the economic course or launching massive reforms. That is why State Duma deputies chose not to grill Viktor Zubkov over his economic leanings during his confirmation as prime minister. The question that worries the political elite is how the new cabinet and Zubkov himself will influence the political alignments ahead of the March elections.

Russian President Vladimir Putin explained the need for Fradkov's resignation: "A year or a year and a half ago many said that we had an `empty field', and no one to choose from. Now at least five people have been named who can stand for president of Russia and have a chance to be elected. It's good that one more person has come along. Russian citizens will have plenty of candidates to choose from."

Although the president has never listed the hopefuls by name, Kremlin watchers have figured out the "Putin five." It includes the two first deputy prime ministers, Dmitry Medvedev and Sergei Ivanov, Prime Minister Zubkov, the chief of the president's staff, Sergei Naryshkin, and the head of Rosoboronexport, Sergei Chemezov. The head of Russian Railways, Vladimir Yakunin, has also been mentioned as a potential candidate. However, to everyone's disappointment, Putin has never said whom he would like to see as the Kremlin boss after March 2008, apparently to keep the elite guessing and to prevent them from putting their stakes on a single candidate.

Not surprisingly, with such a diverse field of candidates, political scientists and high officials are busy rating their chances. There is no unanimity among the crystal-ball gazers. They differ not just over details, but offer several distinct scenarios. The first theory claims that the advent of Zubkov reduces the chances of all the other candidates to zero. That applies above all to the two front-runners, Medvedev and Ivanov, who have recently been restrained by Fradkov personally. Now there is a different prime minister, who, incidentally, seems to make no bones about his presidential ambitions. The game starts anew.

The second theory has it that Zubkov will succeed Putin after all, but not for long. His presidential term would be, according to experts, much shorter than the Constitution prescribes. A reason for stepping down early can always be found. That would make Zubkov an ideal figure to ensure a seamless transition from Putin back to Putin, who would be able to stand for president again after a short break.

The third theory is that six months before his departure Putin has already started determining the "legacy" of the future head of state. In addition to staying the political and economic course, something Putin has promised on behalf of his successor, the new president is apparently expected to leave the government structure intact. Shortly after Zubkov's appointment, the president said that the new government would ensure stability in the period before and, most importantly, after the elections. True, that would keep Zubkov out of the running in the election campaign. His task would be to provide logistical support for the candidates and ensure smooth functioning of the state system after the elections.