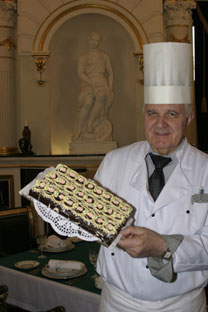 One of Russia's most beloved cakes has an unusual history: we know exactly who invented it and when. The whimsically named Bird's Milk Cake (in Russian fairy tales, "bird's milk" is a luxury so fantastic it doesn't even exist) was created in 1978 by Vladimir Guralnik, the head of the Praga restaurant confectionary shop. It is an unusual cake that reverses the usual ratio of cake to filling: Guralnik's rich confection alternates thick, ethereally light layers of souffle with thin layers of cake, topped by a chocolate glaze. If you can't make a quick shopping trip to Moscow, Guralnik has shared the recipe and helped Russia Beyond the Headlines adapt it for Western kitchens. The trick of the souffle is agar-agar, a thickener that withstands the high temperature needed to make the sugar syrup.

2. Prepare cakes: Cream the margarine and sugar; add the eggs and beat well; mix in the flour and vanilla. Pour in cake tins to form two 1/2-inch layers of dough. Place pans in the top part of the oven and bake until golden - about 10 minutes. Remove and cool on cake racks.

3. For the filling: In a small saucepan, mix the agar-agar and one cup of water and place on a low flame. Heat, stirring, until dissolved and then remove from heat.

4. In a large saucepan, mix the together the remaining 3/4 c water, sugar and agar-agar mixture. Bring the mixture to a boil, then reduce to a simmer and whisk constantly, until the syrup thickens (about 40 minutes). When a spoon lifted from the syrup forms an unbroken stream, stir in the lemon juice and then remove from the flame. Pour into a heat-resistant measuring cup (or container that allows for easy pouring) and cool to room temperature, stirring occasionally.

5. In a small bowl, cream the butter and then mix in the sweetened condensed milk. Set aside.

6. In a large bowl, beat the 3 egg whites with a pinch of cream of tartar until the mass forms firm peaks. Beating constantly with a mixer, pour in the cooled sugar and agar-agar syrup in a thin stream. The resulting mixture should be thick and slightly shiny. Let stand 5 minutes.

7. Add the butter and condensed milk mixture to the egg white and syrup mixture, mixing gently with a whisk at first and then with an electric mixer until thoroughly combined.

10. Before serving, remove the sides of the spring-form pan. To serve, heat a knife under hot water to cut through the glaze without cracking it.

Tip: As soon as you are done with the pans that contained the agar-agar and sugar mixture, immediately place them under hot running water to clean before the mixture sets.