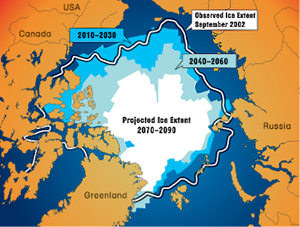 Global climate change goes hand-in-hand with harsh seasonal temperature fluctuations, droughts, tornados, tsunamis and other calamities, to which no part of the world is immune. Some think, as our ancestors thought for millennia, that all these are acts of God.

Laymen merely shrug as experts warn about rising sea levels, thawing polar ice caps, and the air filled with greenhouse gasses. To the public-at-large, these experts are not unlike grannies sighing: "In our youth, winters were sunny and snowy, summers neither stifling nor rainy-and young people behaved!"

Rapid scientific and industrial progress is placing the human impact on nature on a par with that of Providence's. Alas, man is turning a blind eye to the disastrous fruit of his headlong interference.

In a report published this year, the Intergovernmental Panel on Climate Change, one of the most authoritative United Nations agencies, with a membership of the world's leading scientists, confirmed global warming with facts and figures. The previous 11 years were the warmest since 1850. The average ocean temperature rose at depths of 3 kilometers, according to monitoring that started in 1961. This is why sea levels rose by 17 centimeters in the 20th century. Global warming is expected to go on for another 20 years with an average 0.2 degrees Centigrade increase per decade. If greenhouse gas emissions stay at present levels, the warming will go on to bring many other climatic changes in its wake.

Environmental experts brought the topic of climate change into the foreground only as recently as the early 1990s. The United Nations adopted its Framework Convention on Climate Change (UNFCCC) during its Earth Summit in Rio de Janeiro, 1992. Now, 191 countries plus the European Economic Community are members of this Convention. Its strategic goal is to stabilize the amount of greenhouse gases in the air, below the level sufficient for a dangerous industrial impact upon the climate. The Kyoto Protocol was adopted with this purpose in mind in 1997, and entered into force in 2005. It presently has 175 signatory countries.

The protocol is an innovative international legal instrument-the world's first to offer economic solutions to environmental problems, such as trade in exhaust quotas, international teamwork and projects on the Clean Development Mechanism, which envisages developed countries investing in and technologically promoting modernization of obsolete Third World industries. What matters most of all is a pledge by all industrially developed countries to reduce greenhouse emissions by 2008-12. This obligation is thoroughly calculated for each country, and coordinated between the signatories.

Compliance with the Kyoto Protocol promises to reduce total emission by 5.5% against 1990 by 2012. However, it is clear even today that harsh reality may thwart these expectations. European research agencies forecast that the European Union can cut emissions only by 1.6% by 2010 if it doesn't undertake additional efforts. The situation is all the worse as Australia and the United States refuse to ratify the protocol, while the developing countries are exempt from emission quotas.

Paradoxically, the United States, China and India, which lead the world for emissions-with 21%, 15% and 5%, respectively-have no reduction obligations.

The global socioeconomic situation is changing as rapidly as the global climate. The first international steps to prevent climatic change were, in the early 1990s, a promising step in the right direction. Now they demand revision. Confronted by danger, the world needs effective international team efforts.

True, many countries have pledged to stabilize and reduce greenhouse emissions. These emissions, however, keep growing in the majority of industrially developed and dynamically developing countries. Emission monitoring shows that the protocol signatories' efforts are insufficient. Technology sharing, envisaged by the Clean Development Mechanism, does not bring expected results. The incentives for the countries, who wish to assume unilateral obligations, exist only on paper. This makes many doubt the wisdom of the Kyoto Protocol. More and more experts believe it should not be prolonged any longer.

Russia is among the most active in climate protection. The Kyoto Protocol would be void if it had not signed in. Russia thinks it is time now for effective international pledges to fight dangerous climatic changes. The developed countries must evaluate their economic potential to stabilize and reduce greenhouse gas emissions up until 2020 and 2050 as numerical expression of their national obligations following 2012.

The developed countries must help the Third World by technology sharing. Countries avoiding emission reducing obligations need an arrangement in which their voluntary steps will be recognized and rewarded with relevant incentives.

That is the only way to make environmental team efforts effective and achieve results after 2012.

The Basic Principles of the Russian Approach

Climate change demands joint efforts by both developed and developing countries. It is necessary to involve the greatest possible number of countries emitting the largest amount of greenhouse gasses-in particular, those who emit carbon dioxide, as well as the users of traditional fuels.

Whatever new agreements are reached, the distribution of national obligations must be just, and every country's specific situation and socio-economic development must be taken into consideration.

Russia approves of the voluntary character of national obligations and initiatives. The idea Russia advanced in Montreal in 2005 about voluntary obligations envisages granting every country the right to voluntarily make emission reduction obligations-an idea that may become one of the pillars of post-Kyoto arrangements.

By 7% has decreased the maximum area covered by seasonally frozen ground in the Northern Hemisphere since 1900, with a decrease in spring of up to 15%.

By 10-30% annual average river runoff and water availability are projected to decrease by mid-century in some dry regions at mid-latitudes and in the dry tropics, some of which are presently water stressed areas.

1.Winds Mid-latitude westerly winds have strengthened in both hemispheres since the 1960s due to global warming.

2.Droughts More intense and longer droughts have been observed over wider areas since the 1970s, particularly in the tropics and subtropics. Increased drying linked with higher temperatures.

3.Ecosystems 20-30% of plant and animal species are likely to be at increased risk of extinction if increases in global average temperature exceed 1.5-2.5oC.

4.Health Projected climate change-related exposures are likely to affect the health status of millions of people, particularly those with low adaptive capacity, through:
increases in malnutrition and consequent disorders; increased deaths, disease and injury due to heat waves, floods, storms, fires and droughts.