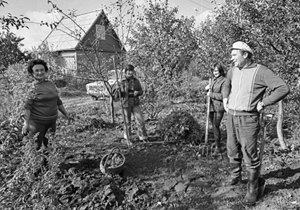 October is the month when Russians bid farewell to Indian summer. Gone are the warm days, giving way to rain, slush and cold. The golden remains of once green leaves have fallen and the trees are stripped bare. And adults and children settle into the cycle of work, homework, lessons, and school breakfasts.

For most, however, October means getting the dacha ready for winter: taking in the harvest, insulating fruit trees, removing fallen leaves and so on. The autumnal dacha garden presents no small amount of work.

More than half of Russians own these "windows to nature", retreats built on small country allotments. But the dacha is more than a simple cottage, an escape from city life. More than a small farm to grow vegetables or rear livestock, the dacha is many things. It can mean a modest summer house between vegetable patches, or two-story houses surrounded by flower beds and English lawns. The "New Russian" marble and granite palaces - with water fountains, swimming pools, tennis courts - are also dachas, insofar as they are in the country and are somewhere to rest place from honest (sometimes not so honest) toils.

The lack of a clear definition for the various types of country homes is easy to explain. In Soviet times, impressive mansions were provided to select members of the government: leading politicians and party-favored cultural and sporting figures. The buildings were surrounded by high fences (usually painted dark green - God knows why), guarded by KGB soldiers, that were called "regime facilities". And because they remained at all times the property of the state, they could be snatched back for any perceived lapse.

So no special term evolved for what amounted to such a closed, rare and unstable thing, though the word dacha derives from the verb davat, "give" or "allot."

During the Khrushchev thaw of the late fifties plots of abandoned or infertile land were given to citizens as remuneration for professional or other achievements. But though the land was free, there were conditions.

The new dacha owner (dach-nik) could use his small allotment (no more than 600sq m) to plant a certain number of fruit trees and grow garden crops. This, the government hoped, would put an end to permanent food shortages. The dachnik who did not want to work their plot was ruthlessly evicted. Second, the size and types of buildings on the allotment were also strictly regulated: no more than 36sq m, one floor, and only lightweight building materials to be used. The flimsy structures were officially meant to store gardening tools and where some could spend a night or two in warm weather. Such squalor and egalitarianism had a good side - no-one envied his neighbor.

But in those years of shortage, even the most miserable of country retreats was built with the greatest of difficulty and sacrifice. I remember well how my uncle - a middle-ranking civil servant in the rail ministry - built his country "mansion" by transporting five or six planks of wood at a time on overcrowded suburban trains over some three years. In those days, cars were a bigger luxury than dachas.

Woven with such difficulty, the country nest became a second home for millions of us, often much closer to the heart than the main city flat. Indeed, most citizens had first- or second-generation roots in the country. The dachnik thus felt the "call of the land", impelling him to drain marshes, root out shrubbery, enrich the soil... to build a little corner of paradise for himself.

Settling the food problem was a utopian dream, but housewives still took pride in pickles and jams "from their own garden".

Many dachas became a means of sustenance in the lean 1990s, with the stormy post-perestroika advent of liberal economic reforms. Unemployment skyrocketed, and wages were suspended for months. Proud flower-growers destroyed their exquisite beds to plant vegetables.

Today, with a better economic environment, flowerbeds have returned to dacha allotments, while solid, comfortable houses, designed for leisure and contemplation of the surrounding beauty, have supplanted the basic summer homes. Trees planted under a compulsory arrangement during the thaw still blossom and bear fruit.

Central Russia had a bumper apple harvest this year. The dacha folk are in dismay - what to do with so many apples? Leave them to rot? Sell them in the market? The lat­ter option is unrealistic: people are too busy and high-ranking.

About half of urban Russian families have plots of land in the countryside. Of these, Twenty-four percent possess summer cottages, 13 percent have only land, and 11 percent have heated houses suitable for all seasons. 37 percent of the summer cottages belong to households with a monthly per capita income exceeding 5,000 roubles (roughly $200).

Twenty-one percent of low-income families, with a monthly per capita income of 1,500 rubles and less, have only land. Sixty-eight percent of landholding townspeople engage in fruit and vegetable gardening at a scale for sufficient household use.

19 percent prefer flower gardening, 16 percent use their dachas for recreation and social events, while a mere 4 percent engage in market gardening. 57 percent regard their land as a source of extra income, and 28 percent as a place to relax.