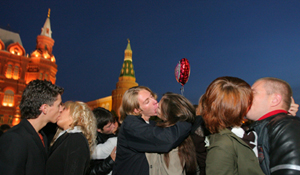 Russia is a nation of strong passions. The land of Anna Karenina, Natasha Rostova and Eugene Onegin inspires many romantic fantasies all over the world and yet it seems that Cupid leaves modern Russians uninspired. One Nikolai Bulanov, a student of the Finance Academy, tried to rekindle the spirit of love amongst his fellow students before the walls of the Kremlin.

Bulanov and his organizational team put out an announcement on the Academy's website, exorting his fellow romantics to gather on Manezhnaya Ploshchad and at a given signal start kissing. Those who came as couples had the easy job. If you came on your own then you had to find out who else was participating. In order to register on the Guinness Book of Records' radar, the occasion would have had to have attracted 6,000 amorous couples' active participation. But just slightly over 5,000 joined in. "Kissing is for many a very intimate, private act, few were brave enough to kiss in public, and especially following a command," - one of the participants said.

If the metro escalators are anything to go by then feeling timid about PDA (public display of affection) was clearly not the reason for the event's lack of success, perhaps spontaneity is the key to Russians' affections.