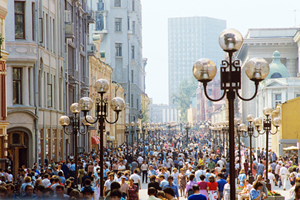 Russia's Investment Forum Results in $22 Billion in Deals for Sochi

Sochi, the site of the 2014 Winter Olympics has received more than $22 billion in investments, most of which are centered around construction projects for hotels and entertainment and shopping centers. The 6th Investment Forum attracted 10,000 Russian and foreign businesspeople.

Russian based Norilsk Nickel, the world's leading producer of nickel and palladium, has closed a deal with Canada based LionOre for $4.8 billion, making it the largest acquisition by a Russian company outside Russia. LionOre is a nickel and gold producer operating in Australia, Botswana and South Africa.

Luxadvor, a company controlled by Russian senator Sergei Pugachev, has bought Paris-based Hediard Groceries. Hediard, established in 1854, is a gourmet company selling luxurious exotic food items in five shops around Paris as well as more than 200 around the world.

Ukraine has agreed to repay its gas debt of nearly $2 billion to Russian state-owned Gazprom. The deal, which requires Ukrainian companies to pay their debts by Nov. 1st, comes after Gasprom's threat to cut its gas supply to Kiev.

The first Russian Starbucks opened in a shopping mall outside of Moscow. The corporation was slower in delving into the Russian market than other foreign chains such as McDonalds due to litigations over the trademark's registration, finally resolved in 2005.