Sovereign Democracy as a Concept for Russia 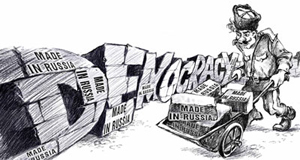 Russian President Vladimir Putin believes that the recently-coined term "sovereign democracy" rather accurately reflects the world's realities and that the debates on this subject in Russia and abroad are "certainly useful." Why useful?

First of all, it is an efficient answer to Russia's search for a term that could organically blend its foreign and domestic priorities, its national interests in dealing with the world and an effective social arrangement, which would enable Russia to react to outside changes and ensure a comfortable life for its citizens. This is no small task and is by no means limited to the right choice of words. The crux of the problem is that the ability of a country to consistently uphold and implement its national interests in the world arena cannot be taken for granted. On paper there are about 200 sovereign states in the world, but very few are genuinely sovereign.

Foreign centers of power, primarily the U.S. State Department, are making major decisions and appointments, even at the middle level, in many "new democracies," which were once part of the Soviet sphere of influence.

So far, only a handful of states can enjoy the luxury of true sovereignty. It is very expensive and even exclusive. China, India and another dozen or so countries are sovereign. What about Russia? Putin is convinced that Russia "is a country, which cannot exist without protecting its sovereignty. It will either be independent and sovereign, or, most probably, won't exist at all."

How should Russia defend its sovereignty, and against whom? This is a tricky question. Everyone agrees nowadays that the new century is free from the fundamental confrontation of the two systems, that Russia has no "enemies" and is not hostile to anyone. So, where is the source of the threat? Does it exist only in our own eyes? Alas, the Russian leadership considers the threat real. The Kremlin sees the threat in one of the key paradoxes of modern international politics: the more aggressive the attempts to "democratise" the world, the stronger the rejection of democratic values and institutions in the countries undergoing "democratization."

It would be logical to ask: If this conclusion is correct, what is the point of imposing democracy? Why not let countries that have proclaimed a course towards democracy after the downfall of authoritarian or totalitarian regimes, be independent in implementing democratic values?

The answer is simple. National interests remain an absolute priority to all. "Democracy-bearers" stand to gain if countries that claim equal status in settling global and local problems can be reproached for lack of democracy. They can offer a kind of exchange - we will remove the question of democracy in Russia and you will give us carte-blanche in Kosovo or on Iran's nuclear program.

The Kremlin's answer is unequivocal, albeit probably too tough: If you want to settle the Kosovo problem, let's talk about Kosovo, if you want to talk about the Iranian nuclear program, let's discuss that; but not democracy in Russia. Nothing good will come of it. But if you are really concerned about events in Russia, let's talk openly about them without introducing irrelevant subjects.

Emphasis on Russia's sovereignty as a democratic state is neither artificial, nor extravagant. Putin and policymakers from United Russia, a political party which enjoys a majority in parliament, speak the European and, on a broader plane, the global political language. As the chairman of the EU Europe and Peace Commission, Romano Prodi said in his lecture in the University of Ulster (Derry) on April 1, 2004: "Kant may have been pleased to see what we have done in the European Union - a form of supranational democracy in a Union of sovereign Member States. In some ways, our Union enshrines the essence of Kant's federation of sovereign democracies."

Speaking in Vilnius in May 2006, U.S. Vice President Dick Cheney made this statement: "The vision we affirm today is of a community of sovereign democracies that transcend old grievances, that honor the many links of culture and history among us, that trade in freedom, respect each other as great nations, and strive together for a century of peace."

In this context, the Russian president's proposal to be serious about the concept of the phrase "sovereign democracy" appears to be quite appropriate and timely. Our world is no longer divided into two hostile camps. We can build a fair future for all nations only by granting to each one the right to sovereign development. This idea is probably too idealistic for advocates of Realpolitik. But will mankind survive in the age of information and technology without ambitious ideas and human ideals?

The author is a professor at the Higher School of Economics in Moscow.