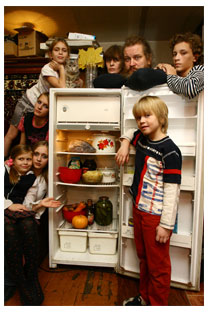 As with many other countries, Russia has experienced a significant rise in food prices. Naturally, this problem has not been met with great enthusiasm. But unlike previous crises, however, there has been no panic or consumer hysteria. Instead, every family has sought its own way out of the situation. Deacon Victor Zavodov from the city of Omsk, Siberia (pictured) has decided to ration his family's consumption of meat and cheese until prices decrease. Zavodov brings in a modest salary - some $350 a month - but that is good money in the Russian provinces, where the price of living is much less than in the capital.

Other families with larger incomes have different solutions that avoid strict budgeting, and we feature some of the families on page 4.

Analysts Kingsmill Bond and Andrei Kuznetsov from the investment bank Troika Dialog recently published a report rating Russia's consumer market as the largest in the BRIC (Brazil, Russia, India and China) quartet of emerging markets. According to their figures, Russian GDP comes in the highest if adjusted for purchasing power.

And the International Monetary Fund estimates that by 2008, this important indicator will reach $15,000, or some 45% of the level of EU member states. Each year, the number of Russians with at least $350 of monthly disposable income (after housing, transportation, health and education costs) grows by 5 million.

The number of those in poverty is constantly falling, while the proportion of those "well-off" - with enough money to cover all their daily needs - has increased from 22% to 29% from 2002 to 2006.

The latest figures from the Ministry of Economic Development suggest that, over the next three years, real disposable incomes will increase by 7.9-10% annually.

This level of growth would, in turn, increase demand for products by 20-30% each year, facilitating rapid expansion in consumer markets - from automobiles and computers to fruit juice and beer.

In 2006, Russia came out top in Europe for sales of washing machines and telephones; second after Germany for beer; and third for automobiles.

By 2008, Russian sales will eclipse European countries in all markets except for automobiles; by 2011, they will be first even in this market.

The Russian consumer market is eventually likely to eclip­se its neighbours not only in size. According to experts ACNielson, by 2025 it will be the most expensive too.

This story was initially published in Vedomosti