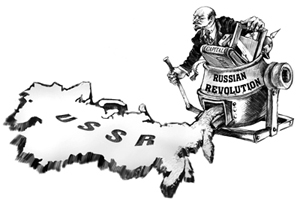 With the 90th anniversary of the Bolshevik revolution only a few days ago, many in Russia look back on this major upheaval in the country's history, trying to reassess its controversial legacy.

Some view it as a man-made disaster that claimed millions of innocent lives and ended in a dictatorship. Others consider it to be a positive undertaking, an attempt to create a state driven by social justice.

The Levada Center, one of Russia's leading pollsters, has recently conducted a survey to find out more about how this historic event is perceived by the general public.

Some 31% of those interviewed credited the Bolshevik revolution with spearheading Russia's economic and social progress. As many as 26% of the respondents said it had helped Russia turn over a new leaf. About 16% argued that it had been a major impediment to the nation's development, while 15% described it as a national disaster. Around 12% gave the "don't know" answer.

The Levada Center's survey suggests that the majority of Russians regard the Bolshevik revolution as a progressive and positive event. Which is, perhaps, one of the reasons why the mummified body of Bolshevik leader Vladimir Lenin still lies in state in the Mausoleum. The post-Communist ruling elite are in no hurry to rebury the iconic revolutionary as they fear such a step will provoke a public outcry.

Monuments to Soviet dictator Joseph Stalin were knocked off their pedestals overnight in 1956, following Nikita Khrushchev's public condemnation of his predecessor's political repressions. Effigies of Lenin, by contrast, still remain in place in many cities and towns across the country. And the faithful continue to pay homage and lay flowers in an expression of an almost religious piety for their communist idol.

Students of Lenin's works will come across a lot of discrepancies and inconsistencies in his writings, as well as examples of downright cynicism, utter contempt for human life, and what we would now recognize as PR tricks. But the aggressive style of his polemics and his analytical reasoning possess a galvanizing power that is hard to resist.

Social upheavals often bring forth leaders with a special talent for rallying the masses behind them. Lenin galvanized crowds in 1917 as he jumped on a personnel carrier to speak about his vision for a communist revolution. And Soviet leader Boris Yeltsin, speaking to his audience from the top of a tank, set forth guidelines for a new, democratic Russia following the August 1991 putsch. Such historical parallels reveal a single pattern, making it easier for us to make sense of our past.

Both Lenin and Yeltsin started out their political careers from a low base, and it was their populist rhetoric, voiced at the right time and in the right place, that quickly propelled them to prominence.

Lenin's slogan "Land to Peasants" struck a cord with Russia's predominantly rural populace, bringing him an overwhelming victory over their hearts and minds.

Yeltsin called for democracy at a moment when the nation was ready to move away from totalitarianism to a freer society, and only lacked a leader to show the way.

There has been a lot of debate lately over the extrajudicial character of the regime change initiated by the Bolsheviks, with some analysts arguing that the October event should be categorized as a coup. But I believe the term "revolution" is more appropriate, if only because its masterminds had a thought-out plan of action, as well as a clear vision for the country's post-revolutionary future.

More often than not, people staging regime change have no respect for the law, and many of them could even be classified as criminals. But in politics, everything depends on perspective.

Governed by the winner-takes-all principle, those who seize power will demonize leaders they have just deposed. So if the 1991 putsch to oust Mikhail Gorbachev had been a success, the hardliners who orchestrated that coup would have surely proclaimed themselves saviors of the nation while vilifying Yeltsin as a criminal.

But whatever tricks politicians may use to conceal the true nature of things, their creeds and motives become apparent after a short while. Lenin was trying to build in Russia a communist utopia he ardently believed in. His successor Stalin had no communism-related illusions when he came to power, but he sought to create a powerful autocratic state through industrialization and the collectivization of farms.

The October "coup" was preceded by a peaceful revolution in February. It is probably true that if not for the bloody follow-up, the birth of the Russian republic would have been much less painful.

A lot of historical injustices can be blamed on the Bolsheviks, but their greatest crime was to slay all those who stood in the way.

The famous Russian poet Alexander Blok believed there was a profound mystical meaning behind the Bolshevik revolution. In his poem "The Twelve," the first poetic attempt to make sense of the event, he presented it as an act initiated by the twelve disciples of Jesus.

Russia plunged into revolutionary violence for the sake of a blissful future. And it went to Calvary, hoping its martyrdom would help the communist utopia materialize.

In hindsight, it looks like the October revolution was a curse rather than a blessing to the Russian nation.