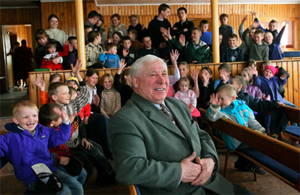 It is no easy task raising thirteen children and bringing up 102 grandchildren, but Alexei Shapoval of Siberia has proved to be up to the challenge. His life is the exception rather than the rule, since the average Russian family has no more than two children.

We cruise along the winding roads of the Siberian township of Bungur, trying to find this extraordinary family.

"Which of the Shapovals are you looking for? We've got quite a few of them," the locals ask. "Go to the church. Today's Sunday, so they'll all be there."

Dozens of children and adults, all dressed up, are gathered outside the church.

"In the past, people would criticize me for having so many children. And then again, our faith used to be frowned upon. We are Baptists, you know...Now my kids have grown up and I'm not ashamed of the way they are. The times have changed, as well. The attitude toward large families isn't like it was before," says Alexei, a heavyset, grey-haired man with a smiling face.

Alexei has, indeed, every reason to be proud of his children. They are all outgoing, hospitable and cheerful, and they look very much like their dad. Four years ago, at the age of 69, a widowed Alexei decided to remarry. Surprisingly enough, the children supported the prospect - an elderly person shouldn't spend his or her last years all alone, they reasoned. But looking at the Shapoval family, it is difficult to imagine how one could ever feel lonely here.

"After we first met, I didn't dare reveal for quite a while that I had 13 children and just under a hundred grandchildren," Alexei recalls. "I was afraid. When I finally told her, she spent the next couple of months thinking my proposal over."

"Of course, it seemed frightening," says Valentina, Alexei's new wife. "The family is, indeed, a large one, so you never know how you'll get along. Me, I have just one son. I remember Alexei bringing me to his place for the first time. He had all of his children get together to introduce me to them. I suggested that their father and I move in together for a month or two to see if we could live together, but they said that if we were really going to live together, we should get married."

One of Alexei's sons then joins in our conversation while cuddling a baby in his arms. He is a father of five.

In the Siberian region of Kemerovo, which is home to the Shapoval family, the past decade has seen the local population decline by as many as 200,000. According to the Federal State Statistics Service, there are 17 deaths and just 11 births per every 1,000 residents. The trend has persisted for a few years now. Analysts from the Severo-Zapad think tank have predicted that the region will lose another 200,000 of its residents in the next decade unless something is done to improve the dire demographic situation. They warn that the consequences of inaction could be grave.

Social anthropologist Alexander Sadovoi believes that the Kemerovo region's demographic crisis is representative of the situation in Russia as a whole. In the past 15 years, the nation has been on the brink of a demographic collapse. Since 1992, its population has been declining by up to half a million annually, which is comparable to the losses that the Soviet Union sustained during the Second World War.

Dmitry Mendeleyev, a famous Russian chemist and creator of the periodic table, estimated that the Russian Empire's population should be 300 million by the start of the 21st century. But unlike the United States, Russia never reached that mark, having lost some 70 million of its residents to famine, war and political repression in the first half of the 20th century, in addition to another 140 million in potential births.

Russia's current demographic crisis is all the more alarming because it puts at risk the nation's sovereignty and the security of its territorial borders. So, what can be done to reverse the current unfavorable trends? According to Sadovoi, Russia's government, as well as society at large, should now focus on human values and work toward raising the standard of living in the provinces, increasing wages and providing spacious, yet affordable apartments for couples willing to have several kids.

Experts say that for the country to be able to regain its population, each household should have at least three children or more, if radical transformations are to be made.

Incidentally, all of Alexei Shapoval's children are raising large families of their own. His eldest son, Vasily, is a father of 12, and his daughter Nadya has just as many. His son Alexei has ten children; Iosif, 8; and Maxim, 4. There is a garden and a greenhouse in every household, which, along with livestock, help provide for the young families.

"I kept saying to my children: Treat the land with love. Farming won't make you rich, but you'll never die of hunger," Shapoval says. "We always kept cows. The kids would work as shepherds in the summertime during their time off school. They were rewarded for their work with hay. When they grew up, the older children handed over the work to their younger siblings. Our family thus spent 17 years looking after the local herd."

Many wonder just how such a large family could be provided for, but, surprisingly, this isn't the biggest challenge. It's much more important to ensure that one's children grow up into honorable adults. This takes a lot of effort. But, for some reason, this task is no longer given as much attention as it deserves. Modern-day parents tend to care more about their families' material well-being rather than about their spiritual development."

A survey conducted last year by the Federal State Statistics Service came to the same bleak conclusion. Low incomes and inadequate housing are the main factors that prevent people from starting a family or giving birth to as many children as they would like. A lack of clear future prospects is another major impediment.

One other fact revealed by the survey is that couples who live together without formally registering their marriage are, more often than not, oriented toward a smaller family than their officially married counterparts.