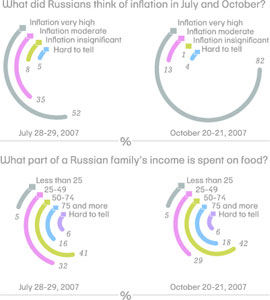 The increase in food prices has ruined nearly three years of the Russian government's efforts to curb inflation. The increase may reach 11.5% by the end of the year, which is almost as high as in 2004 (11.7%), when Russia was hit by a banking crisis.

A survey of the economic situation since January, published by the ministry, says that inflation will be 1.2-1.6% in October, or nearly five times higher than the year before (0.3%). If the ministry's forecasts are correct, consumer prices will grow by 8.7%-9.1% from January to October.

The current price dynamics indicate that inflation will be much higher than 10%.

According to analysis by the Economic Development and Trade Ministry, the acceleration of inflation that started in April was due mainly to an 11.3% increase in food prices since January (5.9% from January to October 2006).

Prices of milk and dairy products, butter, sunflower oil, cheese and eggs soared by 20-40% in late September and early October. As a result, the rise of food prices from January to October 1 reached 8.1%, compared with 6.7% in the first nine months of 2006.

The ministry forecasts a 3%-4% increase in food prices in October.

It pointed to five main factors spurring inflation this year.

The first factor is the shortage of certain foodstuffs (milk and dairy products, butter and cheese) in some markets due to a sharp decrease in imports and an increase in exports (like sunflower oil).

Russian producers increased exports to take advantage of the favorable situation in global markets, while the commercial attractiveness of domestic production plummeted because of a more than 25% decline in real prices over the past three years.

Additionally, domestic production had been growing slowly, in part because of a low or zero profitability of goods such as butter and cheese.

The second factor is the influence of global grain and food prices on the domestic prices of milk and dairy products, wheat, barley, and sunflower oil, combined with a declining competitiveness against imported products.

The third factor was the rapid growth of incomes because of an increase in wages. They went up 21.7% and 25.7%, respectively, in nominal terms, compared with January-September 2006.

The fourth factor was "the consumers' reluctance to save money due to the negative profitability of the most popular saving methods (deposits and foreign currency) and the inability of the majority of people (the low-income segment) to invest their savings in real estate."

The ministry noted that the monthly wage was equivalent to 3.5 subsistence wages, and that 70% of people earned less than 14,000 rubles ($567, or ^392) per capita, or approximately the monthly average.

The fifth factor is a rapid growth of the money supply due to an increased demand. In the past two months, the influence of monetary factors on inflation was limited, as evidenced mainly by the relatively low dynamics of non-food prices and luxury foods.

These prices are extremely sensitive to an increase in demand and in the money supply. From January to September the non-foods price dynamics slowed down to 4% from 4.3% in the same period in 2006.

However, prices of certain goods grew as rapidly as food prices. For example, prices of construction materials grew by 13.6%, or 70% faster than the year before (8.2%), due to a significant rise in manufacturers' prices and an increased demand.

According to the All-Russian Public Opinion Research Centre (VTSIOM) data, over the past three months the number of those who consider the inflation rate in the country to be very high increased by 30% (from 52% to 82%). At the same time, fewer people now believe the price increase was moderate (down to 13% from 35%) or insignificant (1% instead of 8%).

Fifty-six percent point to a large rise in prices for meat and meat products, 48-49% for bakery goods, cereals and pasta, and 41% for fruit and vegetables.

Only 5% of respondents spend less than one-quarter of their family budget on food.

Twenty-nine percent of those interviewed spend 25-49% of their income on food. Sixty percent spend more than half of the family income on groceries, with 18% setting aside nearly their entire incomes (75% and more) for food.

Despite the increasing food prices, the money allotted for food in an average Russian's family budget has not changed.

About half of the people surveyed (52%) are going to cut their spending on food.

Over one-third of the respondents (43%) noted that the rising food prices will affect their family budget but not their nutrition.

As many as 30% of people living in Moscow and St. Petersburg are going to cut down the amount of food they buy, with 46-50% planning to do the same in large cities and towns, and 57-60% in small towns and villages.

Most of those surveyed, or 75% (from 57% of the upper class to 86% of the lower class), consider that such a price increase should not have been allowed to happen.