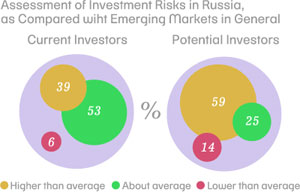 At an annual meeting of the U.S.-Russia Business Council in Moscow, Presidential Aide Igor Shuvalov told U.S. businesspeople that Russia had seen an unprecedented economic boom in the past few years.

The country has built up huge gold and foreign-currency reserves, and the government has established a large Stabilization Fund. All this has resulted in a substantial improvement in living standards.

He expressed confidence that nationwide inflation would eventually go down and match EU and U.S. levels.

Speaking about foreign investment, Shuvalov said Russia would experience an investment boom in the near future. He reminded the audience that national parliamentary and presidential elections would be held in the next six months, and said that foreign investment was expected to soar after the political situation is stabilized. He added that this new wave of investment would be on a new higher level.

"It will be impossible for Russia to open up its strategic sectors to foreign investors, unless other countries reciprocate and abolish tough restrictions facing Russian investors," Shuvalov told the meeting.

He said Russia would play an increasingly greater role in the global economy, and that a high-tech and resource-rich economy would emerge by 2025.