Russia Looks Back at Stalin's Tyranny 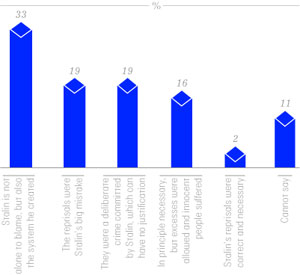 What do Russians today think about Stalin's reprisals?

Only 2 percent approve of the reprisals. As many as 16 percent believe they were necessary to fight the opposition in Stalin's time, though the matter was carried too far and hit many innocent people. Over 19 percent describe the tragedy of 1937 as "Stalin's great error," and another 19 percent as his premeditated crime. A third (33 percent) say the terror was inevitable under the Stalinist regime.