Russia's PATH in the Middle East 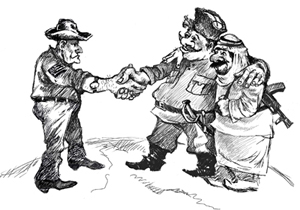 The Middle East is likely to remain in the spotlight for the next few decades. Does Russia have a clear-cut policy in the region? What are its goals, given that it has become much more active in the area lately?

Moscow's somewhat erratic policy in the Middle East is determined by several factors.

First, Russia wants to regain its status as a superpower involved in handling all major international issues. For example, Moscow has always been a cosponsor of the Middle East peace process, even if only formally during the geopolitical decline of the 1990s. Today Russia is determined to make a real contribution to the process, partly to sustain its global prestige, and partly because the solutions proposed by the other members of the Quartet are not working and the situation is steadily deteriorating.

Moscow believes it could be a helpful mediator with nations that are labeled as "rogue" in the West. The Kremlin thinks "mainstreaming" is a much more productive policy than pressuring and confronting, even when it comes to "difficult" partners such as Hamas or Iranian President Mahmoud Ahmadinejad.

Second, it wants to prevent the possible negative effects of military action in the Middle East. For example, a military operation against Iran could destabilize the whole Caspian region, primarily Azerbaijan, especially considering that about 20 million ethnic Azerbaijani live in Iran. Uncontrolled developments in the region could at the very least result in an influx of refugees.

In the event that the United States could not prevent Iraq's disintegration, unpredictable consequences and repercussions for adjacent areas would likely ensue. A defeat of the coalition forces in Afghanistan would be very dangerous for Russia because retaliation by the Taliban would certainly hit Central Asia. Russia will have to make good on its commitment under the Collective Security Treaty Organization (CSTO) to provide guarantees to Central Asian states in the event of an external threat.

Third, energy will certainly remain Russia's political priority. This is the reason why Moscow shows so much interest in countries which play important roles in the global energy market, such as Saudi Arabia, Algeria, Qatar, and Iran. The talk of setting up a gas cartel similar to the Organization of Petroleum Exporting Countries (OPEC) is no more than political speculation. It is not practical since the gas market functions in a manner different from than the oil market, but still, closer contacts and coordination of efforts are important.

Russian companies' commercial interests in the Middle East are a complex and somewhat unpleasant issue.

The Russian business community sees the modern world as a huge marketplace, with tough competition in all spheres. Commercial interests of major businesses are closely linked to the foreign policies of many countries. Therefore, Moscow tends to see pressure put on countries and companies interacting with a nation like Iran as bad competition. In the situation around the nuclear power plant in Bushehr, Russia is trying hard to balance its international commitments with its commercial interests in the Iranian market. Germany, Tehran's largest trade partner, is trying to do the same.

Still, even though Moscow can hardly be blamed for going ahead with the Bushehr contract, the deliveries of Russian conventional weapons to Iran and Syria is a much more controversial issue. The Russian Defense Industry is guided by the principle that a product should be sold in the market where there is a demand for it. This is true since formally Russia is not violating any law. On the other hand, this mercantile approach harms Russia's prestige as a superpower when it comes out that Russian-made arms end up in hostile zones, as was the case with Hezbollah.