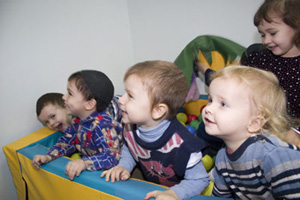 There are many reasons why foreigners adopt Russian children. And while readers of this newspaper may easily see why, these reasons sometimes baffle Russians. Some Russians were suspicious even of Gerhard Schroeder, the former German chancellor, when he adopted two orphans from St. Petersburg.

Every drama that involves Russian children adopted abroad arouses a storm of emotion in their former country. Fourteen Russian children have been driven to death or killed by their foreign adoptive parents in the last 15 years. Many think they were adopted with evil intentions and would have been safer even in an orphanage in their homeland. This is understandable. Americans or Western Europeans would be equally outraged if such a fate befell their country's children in Russia.

The public mood is, of course, all too often determined by ignorance and biased information. Information today is a commodity to be sold - and it sells all the quicker with tragedy and sensation.

Then again, it is true that Russia is facing a demographic crisis. With far fewer births than deaths, the country is supposed to hold every child precious - including orphans. "They are our strategic reserve," says a patriotic lady member of parliament.

The situation is easier to understand with a quick glimpse at history.

The October 1917 Revolution replaced adoptions with "guardianship," with the guardians appointed by government agencies. An amendment to the Family Code re-introduced adoption in 1932. This allowed many children of Spanish Republicans, orphaned during the Spanish Civil War in the late 1930's, to find new homes in the Soviet Union. That was almost the only example of Soviets adopting foreign children.

Though the Soviet legislation never specifically banned international adoption, the Cold War and the Iron Curtain made it practically impossible. The only exceptions were diplomatic families, who occasionally adopted Soviet children. When the Iron Curtain finally came down in 1991, foreign adoptions skyrocketed. Russia revealed to the world that it was in an economic crisis, with wages and pensions suspended for months. Children and the elderly were the hardest hit, and orphans were in the worst plight of all.

The Education Ministry authorized the foreign adoption of disabled orphans. This was a token qualification as adverse conditions meant that many children in orphanages suffered, if not from disease, then from hereditary health problems or repressed development. Foreigners, for their part, often adopted delicate children, the most miserable of all.

At that time, I met an American couple from Connecticut. They had just completed the adoption formalities to take home little Ilyas, an orphan from a small Siberian town. The boy was 8 months old. He was born with one hand missing, and his shocked mother gave him up. There was no need to ask why they were taking on such a burden-I saw them all together, a loving family.

Adoptions were chaotic and uncontrolled in a country infested by self-styled "mediators"-both individuals and organizations. In an effort to impose some order on this free-for-all, a bill was drafted to prohibit independent (unmediated) adoptions and introduce mediator accreditation. It burned along with other papers when the Parliament House was shelled during the suppression of the mutiny of the fall of 1993. The matter was not taken up again until 2000. Russia has changed since then. Surging oil prices have brought affluence, and there are now many charities helping orphans.

Nonetheless, there are even more orphans and abandoned children needing help. The number of orphanages has doubled since the early 1990s, with a current total of 230,000 orphans living in the facilities.

The federal database has 172,000 files of children eligible for adoption. Earlier this year children's grants were increased considerably in order to promote motherhood and adoptions. More orphans are finding guardians or foster parents, but the number of adoptions is increasing only slightly. With an average of 130,000 newly orphaned or abandoned children registered every year, these efforts are just a drop in the ocean. Why, then, is Russia so dogged in its opposition to international adoptions?

First, it wants to bring the matter into order. Since this year, adoption agencies can be accredited only after checks by five ministries, rather than the previous one. So far only 17 agencies have qualified.

A bill prohibiting independent adoptions will be debated by parliament soon.

Russia is willing to make bilateral agreements with interested countries, starting with Italy, France and Spain, to guarantee adoptees' rights. Dealing with the United States will be more complicated, as separate agreements will be necessary with each state.

Education Ministry experts deny that the new legislation will lead to a considerable increase in adoptive parents' expenses, as the agreements promise greater transparency, and in the case of certain countries - France and Italy in particular - the government will take on part of payments itself.

Third, a majority of Russians regard foreign adoptions as a national embarrassment. Many demand they be prohibited, or at least suspended. Public prosecutors have checked orphanages in every part of the country for procedural violations.

The number of foreign adoptions has drastically fallen this year even though foreigners, unlike Russians, adopt adolescents, children of alcoholic, syphilitic and HIV-positive parents, as well as children with congenital deformities. They also adopt siblings, while Russians prefer one child.

I recently heard about an American couple, who came to Russia to adopt a child from an orphanage for mentally and physically disabled children, based near Moscow. At the age of seven, Sasha looked no older than four, and had bad speech problems. Adoption proceedings were about to start when the couple found out that the boy had two sisters in another orphanage. One was eight years old, and the other thirteen. They decided to adopt all three. As they later learned, the children were taken to the orphanage after their grandmother was brutally murdered in front of them.

Now, six months after the children found their new home, Sasha speaks fluent English. The eldest girl has problems but, at any rate, she has given up smoking and does sports.

Not every story has a fairy tale ending. Some international adoptions are dramatic. Both children and their adoptive parents are at the mercy not only of laws and treaties but also of officials, who occasionally abuse their duties, bully adopters and are prejudiced against orphans. It is these mediators, judges and orphanage principals who settle the fate of foreign and Russian adopters. Don't think Russians have it any easier when adopting an orphan. They encounter just as many barriers as foreigners.

The main thing Russia must do is to change the public attitude to children, and learn to see them as the greatest hope and of immeasurable value-as they are to every nation. Only then will orphans have a real chance to be happy in a new home.

As I was writing this, I looked through photos the Connecticut family had mailed me. Ilyas is ten years old now. The pictures show him playing football with friends, walking to school and sitting with his adoptive parents. They all look happy, and the boy appears to have adapted well despite his missing hand. They never concealed his Russian origins from him. Some day, he may ask his adoptive parents about his family back in Siberia. Many children brought up in American families now seek their relatives in Russia.

"There is information and then there is propaganda. It's the difference between reporting events and carrying out somebody's will. I report impartially from the point of view of a person who observes and draws conclusions." This is the creed of the noted Russian television and radio presenter Svetlana Sorokina.

Although Svetlana speaks about herself as being very tough, her friends say she is gentle and kind. She may look unapproachable - prim suits, serious topics - but she is also cheerful. Today, she says, it is her adopted daughter Tonya who is her biggest inspiration.