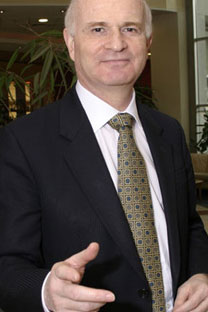 Since 1997, ex-MP David Shaw has been involved in a number of large-scale investment projects in Russia. During this time, he has ridden a somewhat dramatic ride of Russian risk and opportunity. Nonetheless, today he is convinced of Russia's continuing growth, and has detected positive changes in business and work attitudes. In an exclusive interview with Russia Beyond the Headlines, Shaw shares his past experiences and future vision.

How do you rate the current investment climate in Russia?

I think this is an increasingly good one. Indeed, it is being recognized as such all around the world. There is no doubt the BRIC [emerging market quartet of Brazil, Russia, India and China] countries are exciting a lot of interest in the financial markets and London in particular. It's the topic of conversation in London's bars and restaurants - and this, by the way, is where financial markets grew up some three hundred years ago.

So I think the climate of opportunity is there. The question is whether everybody is able take advantage of these new opportunities.

There are obviously problems as well, which people are concerned about. Emerging markets naturally means emerging legal and regulatory systems. In many cases the BRIC countries do not have established legal principles going back many years. In this regard, India has an advantage because India has the basis of British law which investors in London understand. Concurrently, we have a problem with the other three countries - Brazil, Russia and China - because their systems do not have such a history and are sometimes difficult to understand, at least at the present time. Russia, on the other hand, is being helped by a great number of British law firms now opening up in Russia. And both British and American firms are beginning to develop working understanding with Russian partners. Indeed, I'm aware of at least one Russian law firm that has just - in the last three months - set up in London.

You are a frequent business traveler to Russia. What do you think about the changes that have taken place in the country? Do you believe Russia is a country that is good for business?

It really should be said that Russia is making enormously impressive changes. In three years that I've been coming to Russia I've seen a great deal of change - be it a change in the attitude of the people, or a change in the energy and enthusiasm they demonstrate towards work.

One of my business contacts in London is a Russian businessman who brings over conferences involving hundreds of Russian businessmen and women each year. I have met many of these businessmen and women: not just from Moscow and St. Petersburg, the two main cities, but from all over Russia. For example, at the last conference we had some businessmen from as far east as Vladivostok. We are now beginning to see the whole of Russia coming to London to do business, to learn the opportunities that exist for mutual trade and business activities.

As it happens, I think that there will be an increasing emphasis by British and American businessmen on the regions. I have been concentrating a lot of my own activities there, first and foremost because there is so much competition is Moscow and business opportunities - especially real estate opportunities - are relatively expensive. It's usually the case that there are better transactions to be done in the regions. On the other hand, it takes some time to get to know these regions well, which first and foremost means getting to know the people there.

I don't deal directly with the bureaucracies. Instead, I leave that to my Russian partners to deal with. Certainly, they say they have great difficulty. When it comes to real estate, for example, multiple approvals are required: zoning approvals and what we call building control approvals. My company was advising a Russian client on a project, and at one point I asked "How many more approvals?" The answer I got: "twelve."

So bureaucracy does provide difficulties; for many these become barriers. At the same time, however, I should also say I have lived in Britain, an environment not completely devoid of regulation. And when I visited the United States, some of the regulations they have are horrendous. We have to learn to live with bureaucracy and regulation. This is not to undermine the issue in Russia, however. I understand why Russian and Western businesspeople complain a lot about it.

How different are the risk profiles in Russia today?

Investors like certainty, and the fact that there are elections coming up may have some impact.

It's a double-edged sword: Investors like a system of elections but they do not like too much change as the result of the elections. Even in a democratic environment, change is not always good for investors. Investors are putting their money at risk normally for much longer periods than the term of the parliament. Investors like to invest 5, 10 or 15 years, except for certain types of private equity funds that are much shorter term. But all investors like a certain stability to be present.

Inevitably, the fact that Russia is going through elections may mean some people reconsider investment, but I do not expect it to affect the overall level per se. On the contrary, I think investment is going to continue increasing. I was speaking to one American investment banker in London recently who told me that his bank is going to grow and grow and grow its Russian activities in the next few years.

One of the most serious factors hindering business development in any country is corruption. How serious is this factor in Russia? Do you have any personal experience with it?

I cannot say that I have experienced corruption personally. I simply would not get involved in that sort of area. It's something I would stay away from.

Of course, I'm aware of the concerns many other organizations have, as I'm aware of a number of reports in newspapers. Just last week I read that a government official had been arrested [Deputy Finance Minister Sergei Storchak, arrested on charges of embezzlement - RBTH]. But occasionally we have such problems in the West too. We all have to deal with these problems. Besides, what you can surmise from the recent case is that President Putin's government has been genuinely active in dealing with the problems. Vice-ministers do not get arrested without having a government that is against corruption. Russia has to deal with its problems as we have to deal with our problems in the west. We must all support one another.

David Shaw is a chartered accountant with over 25 years of experience in corporate finance. Previously, he was also Conservative MP for Dover, a seat he lost in the 1997 Labor landslide. Shaw currently has several business interests, is non-executive director of an influential business NGO and director of a listed IT company he set up in 1983. Since 1997, Shaw has become involved in a number of large-scale business projects in Russia, many involving the real estate sector.