Debt Maneuvering Has its Rewards 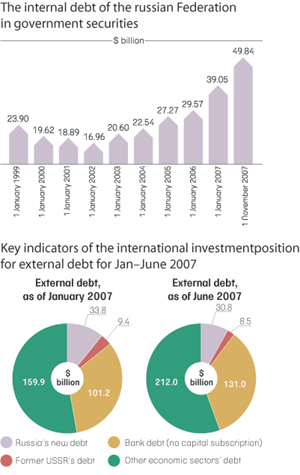 Russia has paid back practically all of its Soviet-era debt. Now experts are discussing an early repayment of some of Russia's new debt.

A quick look at the figures of the country's balance of payments tells us that the external debt is growing. A paradox? Not quite.

Russia's external debt is being fed by the apparently insatiable appetite for foreign credit among its businesses and banks. The sum is hefty, nearly 300 billion dollars.

By comparison, the national debt is negligible. Not so long ago, a high-ranking official of the Russia's Finance Ministry made a surprising statement in Washington, D.C.

Russia, he said, was ready and willing to pay off its debts to the World Bank ahead of schedule. The sum involved was 80% of the loans. These are practically utilized loans and the treasury is wasting money on servicing them.

The sum he estimated as repayment would total about four billion dollars. True, he noted somewhat later, "we have not yet agreed among ourselves" whether or not to pay back that part of the debt, adding the qualification that everything would have to be substantiated and documented.

But even without that caveat, the debt that Russia inherited from the Soviet Union now stands at just $8 billion, and that accumulated in the post-Soviet era, at $30 billion.

If the bank is paid back, Russian debt will be down $4 billion.

Loans taken by Russian businesses and banks are another story. In the past five to seven years they have increased their debt from $29 billion to $300 billion. Many of these banks and companies are partly state-owned, which in creditors' eyes is the principal security for their loans.

If worse comes to worst, so creditors think, the state will pay up.

This is one reason Russia's Finance Ministry has repeatedly sought a ban on state-owned companies issuing debt in a borrowers' market.

Unfortunately, that ban proved ineffective for the simple reason that no Russian bank had pockets deep enough to provide a loan of, say, $10 billion for 10 years. No Russian bank is in a position to issue credit to a major business undertaking; even the biggest Russian banks are by western standards only middleweights.

Domestic debt is also growing. Following the collapse in 1998 of a short-term state obligations pyramid, borrowing did not resume until after the beginning of 2000.

The structure of the debt, based on long papers, or debt issued for five, ten, fifteen or more years, does not help. Current domestic debt stands at 1.230 trillion rubles ($49.8 billion) and is expected to rise to 1.6 trillion rubles ($65.3 billion) by 2009

But this is not necessarily a bad thing. The domestic national debt has been growing according to plan, in line with the debt strategy adopted by the government. It is a useful, if limited, weapon against inflation, because by issuing securities the Finance Ministry trims the economy of excess money. It should be noted, however, that because the sums involved are relatively small by Russian standards, they cannot be expected to be anything more than mildly useful.

Another use of the national domestic debt is to fund pensions, which are facing a mounting squeeze, along with the added burden of funded pensions to take care of and place on the market.

The ultimate question, of course, is whether Russia's debt is large enough to be a significant worry.

The answer is a definitive no. Experts at the International Monetary Fund say that the country's gold and hard currency reserves and the Stabilization Fund are more than adequate to protect Russia from any sudden shocks caused by a change in business conditions.

They also add that the policy of internal borrowing pursued by the government is not an unreasonable one.

Russian national debt is only 8% of the GDP. That figure, if compared with the debt of such developed countries as the U.S., is very low, fund experts say.