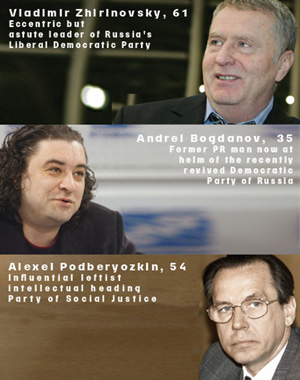 Say "Liberal Democratic Party of Russia" and the typical Russian won't understand what you are talking about. But utter the name of its leader - "Vladimir Zhirinovsky" - and you'll get a storm of contrasting emotions in response.

The Liberal Democratic Party is itself an unlikely structure. It is neither liberal nor democratic, nor is it really a party in any real sense, since its membership is eclipsed by the leader. Few women vote for Liberal Democrats, while the male vote is concentrated in Siberia.

But leader Vladimir Zhirinovsky is an astute politician with the gift of popularity. Doing without spin doctors or PR men, he came a tidy third in the first Russian presidential race. He is perhaps the only Russian politician able to deliver an improvised speech and keep his entire audience spellbound for two hours.

"I'm a big talker and a big writer. I've already outdone Lenin for the number of published works," he says. "And I am closing in on Karl Marx and Alexandre Dumas."

Fluent in four languages and highly-educated, Zhirinovsky is also recognized as a politician with a rare ability to see into the future. In 1996, for example, he correctly forecast the recent division of Russia into federal districts and the establishment of presidential envoys.

At the same time, Zhirinovsky has a well-known history of clowning around. His early electoral success was built on promises to slash vodka prices and imperialist declarations that "Russian soldiers will come to wash their boots in the Indian Ocean." The latter phrase was uttered repeatedly by both nationalists and a number of liberals who could see the humor of it.

Zhirinovsky celebrated his 60th birthday with an extravagant party a year ago, seated - in typical fashion - on a throne made from precious wood.

And his ability to shock certainly remains strong. During the Duma debates on how to fight bird flu last year, he suggested shooting all migratory birds. His parliamentary group later submitted a bill to legalize polygamy, developing the soundbite "a husband for every woman!"

A conscientious leader, Zhirinovsky travels all over Russia by train and often mixes with people on the street.

He frequently offers voters sizeable gifts and money, dead-panning accusations of bribery by pointing out he never asks the recipients to vote for him.

While many remain unconvinced by Zhirinovsky's more eccentric activities, few would dispute Zhirinovsky's own assessment of the situation: "Some present me as a clown but forget that the clown is the central figure in any circus."

The Party of Social Justice is a party considered to be on the moderate left. It has amalgamated an eclectic mix of political positions - from Western social-democratic values to patriotic and Russian Orthodox worldviews.

The Party's leader - Alexei Podberyozkin - has a somewhat different story to that of Vladimir Zhirinovsky. He had a spell working as an electrical fitter. He graduated from the famous Moscow State Institute of International Relations, training ground of many a Soviet diplomat. Up until 1991, he led an impressive academic career as a professor and military-political historian.

The stormy 1990s propelled Podberyozkin to the front of the traditional left opposition. He was prominent on the staff of Vice-President Alexander Rutskoi, who led a mutinous parliament against Yeltsin in the infamous 1993 White House showdown. He was also active in the Communist election campaign of 1996, when Gennady Zyuganov came close to the presidency. Podberyozkin, however, soon parted ways with the Communist Party: cynics claimed they had no use for any politician with individuality.

Two years ago, Podberyozkin left the Party of Social Justice after being invited to advise First Deputy Prime Minister Dmitry Medvedev on the "National Projects" program. Initiated by Putin, these country-wide schemes focus on the most problematic areas of Russian social development, such as agriculture, demographics and healthcare.

On his return to the competitive political fold, Podberyozkin built the main themes of the national projects into his party's new election motto: "people are our everything!"

The Democratic Party of Russia is the perhaps the oddest of all the country's democratic forces. First established in 1990, it was silent for years until being revived in late 2005, when former prime minister Mikhail Kasyanov attempted to become its leader. As it turned out, he failed due a combination of an insufficient knowledge of party rules and original party activists working against him.

Present-day party leader Andrei Bogdanov made his name as a PR man for Sergei Mavrodi, a businessman who achieved notoriety with a fraudulent financial pyramid scheme.

Work in PR has apparently taught Bodganov the importance of catchy ideas. He has proposed legalizing the widespread procedure of buying oneself out of army service, and holding a referendum on Russia joining the European Union. Party activists have no problems collecting signatures in support of the latter idea.

Bogdanov promises to liquidate the party as soon as Russia enters the EU. And with such lofty aims, members shouldn't be too put off by their 1% public approval rating.