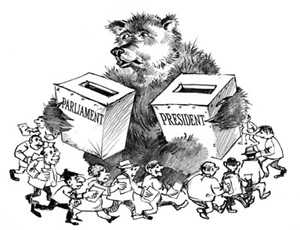 The most important part of the 2007 elections is that society and the politicians have to make a choice and change something in a situation when nobody wants to change anything or elect anyone new.

Eight years of stability and high energy prices under Putin formed the backbone of Russia's economic growth, but have not been conducive to the growth of political competition in Russian society or the emergence of new ideas outside the pro-Putin political environment.

This is a subject that worries many Russians. Public opinion polls show that voters are very concerned over Vladimir Putin's departure - in the last few decades, his popularity rating of over 70% has been the highest among all Russian political leaders.

Over 60% of Russian citizens would welcome a change in the constitution, allowing Putin to be re-elected for a third presidential term. But Putin is adamantly against changing the constitution for this purpose. Moreover, having headed the United Russia party list since early October, he will take part in the parliamentary elections, making them more meaningful than ever before.

There is a number of other factors that make these elections special.

The 2007 elections are exclusively based on the proportional rather than majority pattern. Hence, only people associated with parties are in a position to get into the Duma.

The minimum percentage of the vote needed to get a seat in parliament has been raised to seven percent, which has reduced the number of parties capable of making it to the Duma. In 2003, the lower 5% barrier was no problem for the United Russia, the Communist Party (KPRF), the Liberal Democrats (LDPR), the Rodina bloc, the Union of Right Forces (SPS) and Yabloko, while the Agrarians and the Party of Pensioners balanced on the edge. Now only the United Russia and the Communists are going to make it, with the rest hanging in the air.

In the 2003 elections, we watched the oligarchs fight each other to get their candidates into the Duma. Now this is practically impossible; it is no longer easy to buy parties, either. There are no oligarchs in politics any more but it remains to be seen how much civil society has gained from the changes. However, there is already a noticeable reduction in the number of scandals linked with the names on the party lists. Moreover, public opinion polls show that the voters acknowledge the presence of real politicians at the top of party lists - people respected for their work in the former deputy corps. Before, these lists primarily included local or party bosses.

The changes in the national party system in the last few years have produced an interesting political phenomenon. The official opposition's total weakness has led to the growing role of the so-called exogenous opposition - politicians and whole movements that are taking an active part in the political process without forming a political party for the elections.

These elections have an absolute favorite: the United Russia. Public opinion polls show that it is no longer perceived as a party of bureaucrats.

In the estimate of the Public Opinion Foundation, the United Russia electoral rating has gone up by six percent - from 26% in January to 32% in late July 2007 (the start of the election campaign). The number of people who approve of the United Russia's performance increased by five percent in the same period; the ratings of other political parties had zero growth.

During 2007, young people aged 18 to 35 accounted for 93% of the increase in the United Russia supporters.

The youth factor has become another feature of the current election campaign owing to the analysis of the Orange Revolution in Ukraine (credit for which primarily goes to the young generation) and the heightened attention of the pro-government forces to the young in the last few years. The United Russia has become the main beneficiary of this attention.

Politicians did not previously target younger age groups in their campaigns. The most active group of voters was pensioners, and spending effort and money on campaigning among young people seemed to make little sense. It would be interesting to see whether this tradition will change in December.

Yet, the main feature of the Duma elections is Putin's participation. Many believe that it has altogether changed the nature of the December 2 vote. De facto, the current elections have already turned from a procedure of forming the parliament's lower chamber into a vote of confidence for Putin. While increasing the role of the elections, this factor harbors a certain risk.

Importantly, whether we like it or not, this is how the majority perceives these elections.

Kirill Tanayev is the general director of the Fund for Effective Policy (Moscow), an influential think tank, which is linked with the Russian Presidential Executive Office