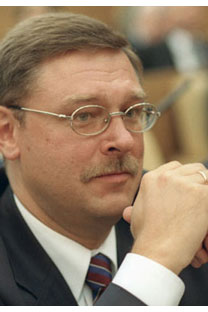 Russia delayed the decision to declare a moratorium on the CFE Treaty for more than seven years. During this period, Russia consistently tried to save the treaty by making it realistic for the country.

When, in April, Vladimir Putin announced his intention to suspend Russia's participation in the Conventional Forces in Europe Treaty, he raised a few eyebrows. The treaty, which commits 28 European countries, the U.S. and Canada to limiting military buildup in Europe, was considered by many a key instrument in insuring an end to an undesirable arms race.

Russians, on the other hand, saw things differently. They saw fundamental inadequacies in the current version of the treaty, signed before the breakup of the Soviet Union and the settling of the Cold War. And they saw a failure of NATO members to ratify the more relevant 1999 update. Writing on this issue, Chairman of the State Duma International Affairs Committee Konstantin Kosachev expresses the belief that the decision to pull out will not lead to any real strategic changes in Europe, revealing that Russia is actually close to re-engaging with the treaty. Behind the suspension of the treaty lies not a desire to destroy mutual peace-assurance, he explains, but to encourage partners to ratify the updated treaty and dispense with the obsolete one.

The basic 1990 treaty, which has its legal foundation in Soviet military space and limits military presence in some of Russia's most unstable regions (so-called "flank restrictions") poses a fundamental threat to Russian national security, Kosachev claims. The treaty also provides no provisions for the participation of the newly independent Baltic countries that border Russia's western territories.

The parliamentarian was eager to emphasize that the moratorium would not be used for new and unjustified deployments of conventional weapons. "Russia is de facto complying with the fundamental provisions of the treaty," he writes. The idea of the moratorium is not to absolve Russian responsibility, Kosachev continues, but to return parties to the negotiating table and put an end to the "legal nonsense" that has lasted for 15 years.