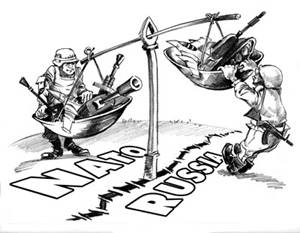 A moratorium on the Treaty on Conventional Forces in Europe (CFE) is a result of a decision that Russia should base its relations with the West on a foundation of principle. In simpler terms, Russia has finally decided to get tough in defending its interests. It seems the hope in Moscow is that by taking such drastic measures to address its own security concerns, it will prompt the other participants in the European process to continue to promote military security in Europe. But this can only happen if Russia's voice is heard.

President Vladimir Putin's speech in Munich, in which he lashed out against U.S. foreign policy, was a prelude to the current developments. In what was primarily an attempt to make the West listen to what Russian policymakers and experts are saying, he bluntly said that NATO's eastward expansion is a huge concern for us (an idea that has been voiced since the Gorbachev era), that the ABM Treaty (from which the United States unilaterally withdrew) is a cornerstone of strategic stability, and that we are very sensitive to the development and deployment of new weapons systems. Being well aware of these concerns, our Western partners took unilateral steps without bot­hering to inform, let alone consult, Russia.

They refused to ratify the modified CFE Treaty (that is, the second version of the original CFE Treaty signed in 1990) concluded at the OSCE summit in Istanbul in 1999 because of Russia's bilateral agreements with Georgia and Moldova.

Importantly, under these agreements Russia has not made any commitment to withdraw weapons and military units from either republic's territory. The joint Russian-Georgian declaration merely mentioned that during 2000, the sides would complete talks on the terms and procedures for the operation of Russian military bases in Batumi and Akhalkalaki, and Russian military facilities on Georgian territory. In the case of Moldova, Russia promised to consider the question of weapons stored in Moldova (Transdnestr) since Soviet times.

Although the legal link between these two documents and the modified CFE Treaty was very dubious, Russia went a long way in its cooperation with Georgia and Moldova to withdraw troops and weapons. This effort could not be completed for reasons beyond Russia's control, like clouded bilateral relations.

Refusing to ratify the modified treaty for eight years, the Western countries have blocked the implementation in Europe of its revolutionary provisions, which for the first time were founded on bloc-free principles. At the same time, NATO's expansion has formally increased its military potential, exceeding the group restrictions of the still-valid 1990 treaty.

Needless to say, it would be odd for Russia to be seriously worried about a higher level of military threat after NATO admitted Poland, Bulgaria, Romania and the Baltic countries. But not everyone can afford to follow this logic - military experts, diplomats and lawyers have to be guided by military balance figures and contractual provisions until they receive other signals or documents from political leaders.

This vision of the world contradicts the partnership proclaimed by Russia and NATO - yet it is the duty of policymakers to eliminate contradictions.

Russia was not happy about the plans to deploy a U.S. missile shield in Alaska and missile defense elements Europe. This shows that partnership with the United States is fragile and that deterrence is still going strong. In much the same manner, the deadlock with the updated CFE Treaty demonstrates the true value of partnership with NATO.

The Moscow-imposed suspension is not an extreme measure. It has not unilaterally walked away from it as Washington did from the ABM Treaty.

Recently, Russia has amassed some weight in the world arena and is becoming more confident and economically stable. It would be great if it could afford not to resort to demarches. It could instead exploit the potential of economic diplomacy and package deals in order to persuade its partners to ratify the updated treaty.

By declaring that its suspension of the treaty is just that - a temporary moratorium on provisions of the treaty and its relevant documents, including the restrictions on conventional weapons, inspections and information exchange, Moscow leaves the door open for a return to the treaty. Having exhausted other methods of persuasion, an exasperated Russia is trying to send a signal to the West.

Russia's actions in the future will depend on many domestic and external factors, and it is not possible to foresee how they will develop. But I for one would like to hope that any steps taken by either side will adequately reflect the diminished level of military threat in Europe, and pave the way to a real partnership.

The negotiating experience suggests that only the political will of statesmen can bring about early compromise and effective arms control agreements. Without that, the reduction and elimination of conventional forces in Europe is unlikely to be a feasible goal.

Sergei Oznobishchev is the Director of the Strategic Assessments Institute