Rostov the Great Lives Up to the Claim 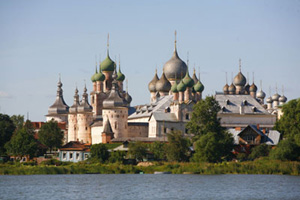 There are actually two towns named "Rostov" in Russia. One is named "Rostov the Great" and has a population of 37,000; the other is called "Rostov-upon-Don" and is more than 10 times larger than its brother. Nevertheless, the smaller Rostov acquired the `Great' in its name over 900 years ago, when Moscow was just a small wooden fortress. Such things frequently occurred to Russian towns: great historical points gradually lost their importance relative to newer locations.

To understand the special aura of Rostov the Great, one must appreciate the location of the town. Rostov stands upon Lake Nero, right at the northern edge of the Opolye district. Opolye, a narrow strip of fertile black soil among the poor grey lands of Central Russia, was a key area for agriculture. Therefore, Rostov and Suzdal (also in Opolye) became natural capitals of the surrounding regions. Rostov influenced the rise of Yaroslavl, Kostroma, Belozersk and other towns of the North-Eastern part of Russia. It was one of two towns that fostered the expansion of the Russian frontier, along with Novgorod. Never a center of military strength or other kinds of raw power, Rostov was instead a spiritual point of utmost importance. Even when the town lost all its power, the cathedral of the Metropolitan remained in Rostov and developed into the Orthodox center for all North-Eastern Russia. This strong spiritual center, combined with generous donations from tsars, boyars and profits from real estate belonging to the Church, enabled the Rostov Metropolitan Jonah to erect the prefect ensemble that still impresses visitors to this day.

The sights of Rostov that make the town a top tourist destination are the kremlin (the fortress) and the surrounding monasteries. They form the typical structure of the core fortress and the surrounding bastions, characteristic of Russian towns in the 15th and 17th centuries. Spaso-Yakovlevsky, Avraamiev and othermonasteries served as bastions, and the residence of the Metropolitan was the central dungeon of the entire defensive complex. Strangely, no enemy threatened the town at the end of the 17th century when these defenses were built. And here we touch on a matter tightly connected to Russia's medieval world-view.

According to the writings of Russian clerics in the 17th century, sacred objects like churches and monasteries symbolically represented the structure of the real, as well as the supernatural, world. Therefore, the residence of the Metropolitan, who spiritually fights the powers of evil, is similar to an important fortress, and the monasteries resemble bastions. The walls and towers of the kremlin are about 10 meters high and 2.5 kilometers long, with elevations arranged so that one can walk around the whole fortress without descending to ground level. Aesthetic and sacred considerations are visible in the kremlin defenses. For example, all the gates contain images of majestic churches.
Rostov has not been a traffic hub since time immemorial - a rare case for a Russian town. But around the kremlin the market was always active, for local peasants developed high skills of agriculture - thanks to their Opolye once again. Rostov onions, for example, have become somehow the best in Russia - though inhabitants of neighboring Suzdal doubt this claim and insist their onions are best.
New changes came with the industrial era and Rostov was rather late with reforms. Still, some textile factories were established here by the end of the 19th century. But in general the town remained agricultural. Until the end of the 1950s, this status was not an obstacle for Rostov, but later the trend of `industry or poverty' dominated the Russian province. Rostov was forced to accept poverty.

In the 1960s, when the Golden Ring travel route was established in Russia, Rostov was a premier feature. Among with Suzdal, Rostov was given the status of a museum reserve, and this status was incompatible with development. So tourism and state funding became the main sources of income for Rostov, together with a declining agriculture tradition.

Today, Rostov remains a poor town, and this is rather obvious around the kremlin grounds. Some old stone houses (Classic- Art Nouveau- Empire-style) are in terrible condition and deteriorating. Rostov inhabitants do not seem prosperous, as they walk down the streets, as tourists depart, to drink their usual vodka. Those who are engaged in the travel industry have jobs and some money; but those who are not, have the choice to migrate to Yaroslavl or Moscow - or suffer. A difficult choice, but an inevitable one today. The transformation to the post-industrial stage will take decades. Will Rostov, one of Russia's fairy-tale towns, survive the wait?