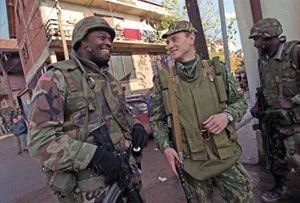 The talks on Kosovo's future status are entering a decisive phase. The contact group on Kosovo - mediators from the EU, Russia and the U.S. - should submit its report on the course of negotiations Kosovo's status by December 10. The draft constitution based on Martti Ahtisaari's plan will also be made public in the province in early December. Mikhail Margelov, chairman of the International Affairs Committee at the Russian Federation Council, upper chamber of the Russian parliament, told Rossiyskaya Gazeta about the future discussion of the Kosovo situation and Russia's position on it in the UN.

What will happen after the UN Security Council receives the Kosovo report from the international mediators?

Everything depends on what they will write in this report. In effect, the three mediators should not side with either party in the dispute, neither Belgrade nor Pristina. They are not supposed to determine the form and content of Kosovo's status. In other words, they cannot grant independence to the province but should promote dialogue between the Serbs and the Albanians with the goal of finding a compromise. Ultimately, the decision on the status of Kosovo will be made by the UN Security Council.

Having extensively studied the problem, the mediators have come to the conclusion that a return to the 1999 situation is not possible. Yet they believe that Belgrade and Pristina could reach agreement on a number of major issues, such as social problems, minority rights, the power industry, cultural heritage and crime prevention.

They have compiled a document insisting on continued dialogue between the two sides. They also recommend formation of common Serbian-Kosovo bodies of government. This document does not mention independence at all.

What will be Russia's position at the UN Security Council session on Kosovo?

I don't think that Russia will change its current position on Kosovo. For Russia, this is a matter of principle. As a federation, Russia understands well both the Serbian and the Kosovo problems. Relations between the center and the provinces are a sensitive issue requiring close attention. The Russian Foreign Ministry has stated that "eventual acquisition of independence by Kosovo will set a precedent." If Kosovo is separated from Serbia in defiance of international law, in principle Russia may recognize the independence of Abkhazia, South Ossetia and Transdnestr because all obstacles, or at least legal ones, will be removed. So for the time being there are no grounds for Russia to consent to Kosovo's unilateral independence, ignoring Belgrade's opinion.

How deep are the U.S.-Russian disagreements on Kosovo?

In many respects, U.S. foreign policy is ideological and is based on the fundamental goal of spreading democracy. In this context, Kosovo's independence is a principled and even value-oriented position of the United States. Washington has never deviated from its ideological course and has to insist on Kosovo's independence. It believes that something has to be done. After all, initially the methods of resolving the Balkan crisis were no different from the Iraqi campaign.

For its part, Russia adheres to collective international decisions and prefers consensus to a unilateral approach. Neither the United States nor the European Union can make the status of Kosovo legitimate - this is the prerogative of the UN Security Council. Therefore, I believe that the U.S.-Russian disagreements on Kosovo are deep but I wouldn't call them insurmountable.

What prevents the international mediators from promoting constructive dialogue between Kosovo Albanians and the Serbian leadership?

Neither Belgrade nor Pristina are prone to compromise and flexibility. The stakes are too high for both sides.

Do you think that following the Kosovo example the unrecognized republics in the post-Soviet space, the Flemish community in Belgium, Scots in Britain, and Catalans and Galicians in Spain will press more actively for their independence?

Needless to say, unilaterally granted independence to Kosovo, in defiance of the UN Security Council, will create a precedent in favour of separatist movements. No U.S. or EU explanations about the uniqueness of the Kosovo situation will stop them. Moreover, Russia, for one, has major doubts about the unique character of this situation.

Mikhail Margelov was born in 1964 in Moscow and graduated from the Institute of Countries of Asia and Africa, affiliated with Moscow State University. He has worked as an interpreter, has taught Arabic, and was Senior Editor of the Arab section in the TASS News Agency. He headed the Public Relations Department during Boris Yeltsin's administration. From 1998 to 1999 he held a managerial position at RIA-Novosti Information Agency. From 1999 to 2000 Margelov was a director of the Russian Information Center (Rosinformcentr). He was elected to represent the Pskov region in the Council of Federation, then joined the Committee for Foreign Affairs; the next year, he was elected chairman of this committee.