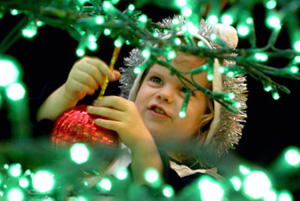 Strange though it may seem, it was actually the Communist Party that was responsible for giving Russia Europe's longest and happiest end-of-year holidays.

The result is that, instead of one New Year and one Christmas, Russia celebrates two of each.
Thus, for the most Europhile Russians, festivities begin
on December 24 in celebration of the Christian Christmas. Thereafter follows the most radically celebrated of all - New Year's Eve.

Then we have Russian Orthodox Christmas (January 7) and, finally, Old New Year (January 13).

Of course, private restaurants and shops will continue to work; many for the usual 24 hours a day.

Time to spruce up and welcome Granddad Frost

No Russian home could do without a Yelka (spruce) Christmas tree. Whether real or synthetic; miniscule or scratching the ceiling; from the forests just outside Moscow or from Scandinavian farms (in which case, it is no spruce, but a shabby fir), no Russian family will be without one.
R
Essentially a sister of the European or American Christmas tree, the Russian Yelka does however have a few differences.

First, Russians do not aim to decorate the tree by Christmas Day, but right up until midnight on New Year's eve. Second, handmade decorations are not the done thing in Russia, even in the poorest families. This is because the Russian Yelka is designed to demonstrate not so much talent and personal ability, as much as the family riches. The Russian is necessarily obliged to break the bank on toys: baubles, electric lights, bells, snowflakes and so on.

The director of festivities, on the other hand, is the unusually conservative Granddad Frost. Unlike Santa Claus, the Russian Granddad Frost would seem absolutely oblivious to market-exchange relationships. A tall old man with full beard, Frost is only aware of his most important responsibility, ie handing out good presents to good people. And here he is aided by his charming granddaughter - the Snow Maiden - who, as legend has it, is supposed to melt in spring.

As in other climes, Granddad Frost and the Snow Maiden entertain countless families in grottos nationwide. These enterprises have become recognised as an invaluable source of income for many struggling actors.

Officially, Russians are obliged to return to work on January 9. In reality, most extend their 10 days leave to include Old New Year on January 13.

This occasion will, once again, call for a full festive spread. Most likely, the table will be covered by blini pancakes. The traditional way to enjoy a blini is to spend some time outside in the freezing cold, before returning to the warmth, downing a vodka and grabbing a pancake smeared with butter and caviar.

This is also a day to take the decorations down, brush away the fallen pine needles and store away a mass of unwanted presents in the loft.

From this point, only the most stubborn choose to continue. There is one club in St Petersburg, The Snowstorm, which stoically prolongs the celebrations to unheard of dimensions. It is the only place that I know of which, every day, on the strike of 12 cracks open the champagne to celebrate... the traditional Russian New Year. And no-one seems to mind.

Every New Year is celebrated by Russians in identical fashion. Two minutes before New Year, the President appears on TV with a national address. This is a Russian tradition Brezhnev did it, as did Gorbachev, as did Yelstin, as does Putin now (and there can be no doubt that Catherine the Great would have done the same had television been around in the 18th century).

Then, for one minute, the whole country watches their television sets which are invariably broadcasting an image of the country's largest clock on the Kremlin's Spasskaya tower (erected, as happens, during the era of Catherine the Great). As the minute hand approaches 12, everyone counts the bell chimes.

When they ring for the twelfth time, three things follow automatically.

First, the obligatory bottle of champagne is popped (recently, some sophisticates have begun to open the bottle in the French manner quietly and without pomp though this is generally recognised as wholly wrong).

Second, everyone shouts "s novym godom!" ("Happy New Year!"); some also open doors and windows, to let the New Year into their house.

Third, a mass of presents begin to materialise under the Yelka, for kids and adults. If you find yourself celebrating New Year in a Russian family, you can be sure that a present will materialise for you too.

I say "materialise" for the simple reason that every year, beginning with childhood, I have attempted to monitor how presents appear under the tree. The same thing has happened to me every year: just before the Kremlin chimes begin to ring, there is not one present to speak of; by the time the chimes finish, a mountain of them has appeared. A Russian miracle, I'm sure you'll agree, and one which you can't even explain by $100-a-barrel oil prices.

Although, of course, the $100 commodity price-tag does explain how Russians have begun to traipse round shops for a good week or two prior to New Year. They blaze through presents of all descriptions, the average price of which has for many years been ballooning.

For example, this year the Russian version of the Robb Report recommended that its readers buy their loved ones (a) the Pagani Zonda F sports car, (b) a full-size merry-go-round, and (c), a retro Black Swan sailing ship. As stocking fillers, the magazine recommended a vineyard in South Africa, an apartment in Moscow and a chateau in France.

Of course, what Granddad Frost receives himself is a secret unknown even to Russian science.

Generally speaking, the Russian New Year is a festival that has traditionally been celebrated at home. Indeed, under the old regime, all restaurants were ordered to close at 10 in the evening; while escaping abroad was only possible using the Rudolf Nuriev technique - ie a swivel and jump over the Iron Curtain. Whether one liked it or not, there was no choice but to sit at home. For those lovers of extreme adventure, there was another option - the dacha, an out-of-town retreat sometimes translated (somewhat erroneously) as "country house". The use of the word "house" here presents difficulties in that it suggests the presence of sewerage systems and water supply.

From those times, much has changed. A great number of restaurants have opened; tour firms are now two-a-penny; and dachas have been swapped with foreign palaces. All the same, the habit of staying at home remains great. Even restless Russians generally leave the country in the days following New Year.

Travel itself is usually in one of three directions. The first is to Europe's snow-topped peaks for skiing and snowboarding. These tours are usually the most popular; indeed, elite resorts such as Courchevel become Russian colonies over the New Year break. The second group of destinations are European capitals, of which Paris is most popular. The third option is to turn winter into summer and set off for Thailand, UAE, the Maldives or - for those on tighter budgets - Egypt.

A magic night for great food

All over the world, holiday cooking is the last bastion of national resistance to globalisation. Dishes prepared for the main holidays ignore the fundamentals of healthy eating and replace it with tradition.

Such occasions are rare - usually once a year, on the principal religious feasts in most countries. Russians celebrate New Year's Eve on the grandest scale, the night to reconcile all religions and denominations.

The centrepiece of a Russian holiday table is a dish that has too many calories to be healthy, but is excellent for the soul. It is called Olivier salad, named after its inventor, Lucien Olivier, a French chef who lived in Moscow in the 1860s. It is a mixture of fresh apples, pickled cucumbers, boiled potatoes and carrots and hardboiled eggs, all chopped into very small pieces, plus canned green peas (I wonder where Mr Olivier obtained them in the mid-19th century), lavishly garnished with mayonnaise. The salad is served in amazing quantities. Many of the new rich attempted to shift the emphasis to pate de foie gras, but soon turned back to Olivier.

Ranking next in popularity is seledka pod shuboi (literally, "herring in a fur coat") - an elaborate dish with a bottom layer of grated boiled potatoes, then a layer of sliced herring, which underlies a layer of chopped hardboiled eggs and is topped with grated boiled beet. All this also drowns in mayonnaise to make a delicious if somewhat heavy hors-d'oeuvre.

Next come zakuski. Many languages have borrowed the word from Russian. Translated, it means a special kind of starter. The most popular is narezka, an arrangement of sliced meats. The word derives from rezat, meaning to "cut" or "slice". There are about 50 kinds of narezkas, with no fewer than five served at the New Year table. Beef and pork is boiled, grilled, simmered, smoked or dried for the purpose.

The Russian vocabulary has more than 50 jaw-breaking terms for those delicacies, such as buzhenina, boiled salted pork, or syrokopcheny orekh. No one knows what the term really means, especially since the misleading phrase literally means "smoked nut". However, all who taste it seem to like it immensely.

Following in popularity are solenya, salted or pickled vegetables - cucumbers, tomatoes, wild and garden garlic, cabbage and so on. There are about 100 recipes. Russians also love their griby (mushrooms). Mushroom dishes are extremely sophisticated. Some are soaked in water for several weeks to remove poison, or else the mushrooms would be something like the Japanese fugu fish. If you come to Russia, try salted gruzdi, milk agarics. Many people find them the best complement to vodka. All the kinds of salted mushrooms are usually garnished with sour cream.

The most famous Russian delicacy is caviar, usually served in cut-glass bowls. There is another linguistic peculiarity here; the word ikra means both sturgeon caviar and the cheaper salmon eggs. The former is referred to as "black caviar", and the latter as "red".

Caviar is spread on buttered bread as a prelude to the New Year feast, accompanied by champagne.

What Russians know as champagne is another linguistic trap. The Iron Curtain made real champagne from France unavailable, and the regime never had any consideration for brands. So a modest sparkling wine was amply produced under the name of Soviet Champagne. Public taste for it did not vanish with the Communist ideology. Now, it is honestly labelled, though the words "Soviet Champagne" still remain on the label under the description "sparkling wine".

New Year celebrations and dishes that go with them are shared by all Russians, though the choice of hot food is not as obligatory. Everyone chooses something to his taste.

It's no secret that Russians disproportionately adore the New Year. At least we used to, back in Brezhnev's early '80s, when it was the only truly private holiday aside from one's birthday: intimate, all-inclusive, apolitical, non-denominational. The New Year meant a clean break, a new beginning, the promise of a miracle. Year after year, it followed the same unshakable formula: large table spread awkwardly in the middle of the living room, fir tree in the corner, oxymoronic "Soviet Champagne," presents, frantic midnight calls to the long-distance kin... and the triumvirate of classic Soviet holiday movies alternating on the muted TV. Here they are

If this year, watching a wisecracking angel get his wings yet again feels especially old, try swapping old Capra out for one of these three.

Follow the link and enjoy pieces from the triumvirate of classic Soviet holiday movies offered ny the RUSSIA! magazine.