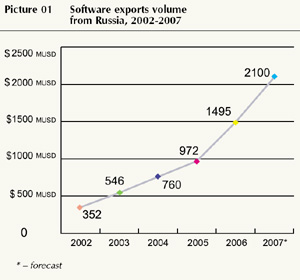 One of the main pillars of the Kremlin's "national project" programme is supporting the growth of the high-tech industry. Much of this strategy focuses on long-term deliverables and complicated science. Nonetheless, one particular area - the provision of IT support and software - is already starting to witness something of boom.

In October 2007 Russian Minister of IT announced "the volume of Russian IT industry grew by 20pc and reached the 1,162 trillion RUR or 47,4 billion USD". According to the all Russian association of software developing companies "RUSSOFT" software export grew by 54% and reached 1,5 bln USD.

Other independent sources (NeoIT, IDC, Frost&Sullivan,...) confirm that positions of Russian software development business on the global market have strengthened. The most important improvement can be seen in the fact that overseas partners of Russian companies stopped complaining of problems they worried about some years ago: weak infrastructure, lack of knowledge of the English language, drawbacks in quality management and intellectual property rights protection.

According to just published RUSSOFT market survey the growth of Russian software export was also influenced by the general worldwide trend on the outsourcing software development market according to which more complex works, including scientific researches, are assigned to outsourced developers. The president of Intel Russia Steve Chase vividly described the specialization of Russia on the world market of software outsourcing services: "We commit difficult problems to engineers in the USA. If the task is very labor-intensive we assign it to the Indian specialists. If the problem can not be solved, we offer it to Russians".

Many research companies as a rule abstain from such a ranking. They do not dispute the leadership of India. Certainly Indian income from export of outsourcing services is the highest. However if researchers could segment the market and form a single category of complex technologically-intensive services, the leadership of India will not seem so overwhelming now and in the next few years. Especially taking into account the rushing growth of Russian companies' export.

The economical situation in Russia is changing. The volume of direct investment in Russia is growing rapidly - twofold in a year. The market players themselves are positive about latest changes in government policy. RUSSOFT Survey shows 76pc of bigger companies consider the government support to have improved within last two years.

The growth of export is regarded as one of the main trends of development of markets. The second trend, slightly unexpected by the researchers, is the growth of the local market, which shows cooperation with the Russian customers became as profitable as with foreign ones. Besides, the consolidation of business continues to increase. This index is traditionally higher among bigger companies from Moscow and St. Petersburg. Another important and positive trend, both for the Russian companies and their overseas clients, is the growing index of implementation of quality management systems. For the passed year the number of companies having quality management systems complying with one of the international standard (ISO or CMM/CMMI) increased from 18% to 28%.

All the above mentioned tendencies together with the growth of Russian overall IT market provoke increasing competence on the labour market. Despite this fact the industry has quite employee turnover rate. For bigger and midsize companies it is 6-8pc and for the smaller ones - 10-14pc per year. These indexes allow the customers have stable and motivated teams of developers and much lower doubts about meeting the deadlines and the success of the whole project. Against India where employee turnover reaches 70pc Russian IT industry looks especially profitable.

"The results of our research correlate with conclusions of reports by IDC, NeoIT and Frost&Sullivan which show dashing growth of Russian software export industry and its becoming on of the leaders of software outsourcing. The uniqueness of the situation in Russia is determined by the combination of the growth of export and the local market. This combination allows potential clients deal with Russian companies not only as outsourcing partners, but also as promotion partners in Russia." - Valentin Makarov, RUSSOFT president, said.

Alexis Sukharev, President and Founder of Auriga, the software R&D and IT outsourcing services provider incorporated in the U.S. that has been operating development centers in Russia since 1990 comments on the findings of the Russoft study, ""The demand for Russian IT skills has been increasingly growing in the U.S. and Europe for the last several years. The Russian engineering labor pool has a lot to offer to companies who seek specific R&D skills and need a comprehensive approach to complex projects. In the current multi-sourcing environment, experienced Russian outsourcing service providers are able to become reliable strategic partners for Western high-tech and software companies."