What is Medvedev's CV 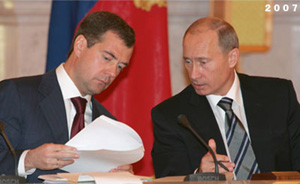 Dmitry Medvedev owes his political career to Vladimir Putin. For most of their 17-year acquaintance, the President has been his boss, in St Petersburg town hall, the federal government and the Kremlin.

Just like Putin, Medvedev was born in Leningrad, now St Petersburg (September 14, 1965), and graduated from the law department of Leningrad State University. Their paths crossed in 1990, when they were both working for Leningrad Mayor Anatoly Sobchak.

Medvedev worked with Putin on Sobchak's team until 1996, when the mayor lost the election to Vladimir Yakovlev. He served as a legal expert on the mayor's committee for foreign relations, headed by Putin, and later became an adviser to Putin when he was appointed first deputy mayor.

From 1990 to 1999, Medvedev was also assistant professor of civil law at Leningrad State University and had a private practice. He worked in business, in 1990 co-founding Uran, a small state-controlled company, and in 1994 established the Balfort civil law consultancy with his former course mates. In the autumn of 1999, Medvedev was appointed deputy chief of staff of the federal government. Vladimir Putin was then Prime Minister.

In June 2000, he was appointed first deputy chief of the presidential executive office and chairman of the board of directors of Gazprom, a significant post in Russia. In October that year, Putin asked Medvedev to be chief of the presidential executive office. In November 2005, he was appointed First Deputy Prime Minister, encouraging the belief that he would succeed Putin. However, First Deputy Prime Minister Sergei Ivanov was also considered a potential successor.

Some time before, Medvedev had been put in charge of priority national projects, which journalists and analysts saw as a grooming for the presidency. (National projects were considered a useful vehicle for promoting a positive public view of the authorities.)

In July 2006, Medvedev criticised Ivanov's favourite term, "sovereign democracy", in a magazine interview. Medvedev was regarded as a Kremlin liberal, while Ivanov was thought to represent the more hawkish law-enforcement and security faction.

The people liked the national projects, and Medvedev's rating soon soared ahead of Ivanov's. In a Levada poll in January, 33 percent of respondents said they would vote for Medvedev in the first round and 54 percent in the second.

Many Russians thought that Putin was using the Medvedev-Ivanov debate to divert attention from another unknown candidate. But it became clear on December 10 that Medvedev had won the unofficial race for the nomination.

Medvedev is married to Svetlana, whom he has known since school, and has a son, Ilya, born in 1996. His youthful hobbies were hard rock, photography, weightlifting and chess.