In the candidate's own words... 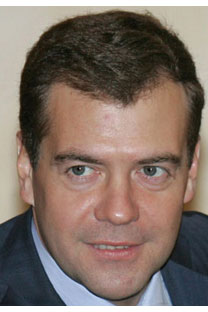 I still don't like that term [sovereign democracy]. I still believe that any full-fledged democracy must be based on state sovereignty. But as a lawyer, I consider it excessive to over-emphasise one particular sign of full-fledged democracy: the supremacy of the authorities at home, and independence abroad [to Vedomosti newspaper, July 5, 2007].

On relations with the West

Russia is part of Europe and European civilisation. This does not mean that we should forget about other partners; Russia must look in all the directions [from a speech at the 59th World Newspaper Congress, June 6, 2006].

I don't think Russia should oppose America. This may seem obvious, but Russia's role in the international community depends on its economic might and a healthy political system. If we ensure both elements, Russia will play an increasingly active role in the world [from a speech to the 59th World Newspaper Congress in Moscow, June 6, 2006].

I don't think that state corporations are more efficient than private corporations. On the contrary, I hold the opposite point of view. But there are certain sectors of the economy where state-owned companies are essential, especially for Russia [to Vedomosti newspaper, July 5, 2007].