What career ambitions do young people have? 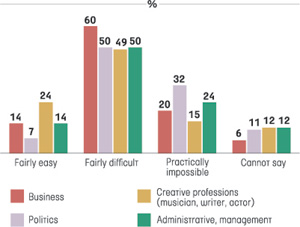 According to a poll conducted by the All-Russia Public Opinion Research Centre, VTSIOM, young Russians overwhelmingly rank good connections (59pc) and good training and qualifications (54pc) as the necessities for career success.

Young people believe it is easiest to succeed in the creative professions (24pc). Considered more challenging are business and management (14pc each), and politics (7pc).

The VTSIOM poll was conducted on November 10 and 11, 2007, and sampled 1,600 people from 153 cities and villages in 46 regions, territories and republics across Russia. The poll has a margin of error of 3.4pc.