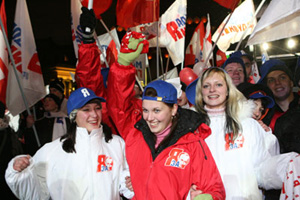 Officially, "Putin's plan" refers to a document which emerged in May 2007, penned by the pro-Putin governing party United Russia. Later, it was to become their campaigning manifesto in the Duma elections.

Putin himself stressed support for the programme by agreeing to head United Russia's electoral list in October. Moreover he recently confirmed that this plan would form the basis of "any policy carried out by the future parliament, government and head of state". Clearly, Putin's plan should be seen as not only a dominant theme in the current election campaigns, but also as a roadmap for Russia's political course over the next four or more years.

The significance of the detail of Putin's plan has already been recognised by opposition forces. Indeed, the strategy has been aggressively criticised both from the Left and the Right. Communist Party leader Gennady Zyuganov, for example, described it as a document "in support of big business and the oligarchs". The leader of opposition party Union of Right (Just) Forces, Nikita Belykh, offered an even less guarded and more serious condemnation, describing it as "the road back to the USSR, to a single-party system, lack of rights, the uncontrolled dominance of officialdom, an ineffective economy, the cult of the leader, the Cold War, the arms race, spy mania, and struggle against `the enemies of the people'."

On the other hand, how far the "plan" is genuinely understood by the general public is a matter of debate. In a poll conducted October 12 to 16, sociologists from the independent and respected Moscow-based Levada Analytical Centre asked respondents whether they had heard anything about "Putin's plan" and, if so, what they knew. Only 6pc were able to answer this question. Nearly half - 47pc - had never heard about it; 12pc had heard about it but could not explain it; and another 29pc knew "something" about it. Six pc found the question difficult to answer.

On one level, this could suggest that United Russia - and the President - are hopelessly out of touch with the electorate. On another level, ask the same question a different way, and you will receive a picture reversed 180 degrees. For example, in response to the question "do you think Putin has a clear-cut plan of reforms and knows what he wants to achieve?", no less that 65pc of respondents answered definitely or probably "yes". Only 19pc answered "no", and a further 14pc of respondents declined to answer.

When the respondents were asked whether Putin had a plan which could make Russia strong, rich and prosperous, 58pc replied in the affirmative - either "definitely" or "sooner yes than no"; 23pc said "no"; and 19pc could not answer.

So what exactly is contained in this plan? Boris Gryzlov, one of the documents's main architects and current leader of the United Russia parliamentary faction, offered the following commentary to RBTH:

What exactly is Putin's plan?

It is simply the political course of the current President. He has already outlined its basic ideas in his annual addresses to parliament. Together with the government, our deputies have been working on these tasks since 2000. In the last four years alone, we have passed more than a thousand laws and have effectively rebuilt the legal framework we inherited from the Soviet Union.

What timescale is anticipated?

For United Russia, Putin's annual addresses are not some individual and scattered documents, but a comprehensive strategy of national development. Each address sets both strategic and tactical tasks, which we have been implementing step by step. Vladimir Putin is a leader in charge of national strategy and this is why we have dubbed his ideas "Putin's plan". It is our view that this plan should be implemented even after Putin leaves office in 2008.

What is the plan's priority?

I would actually emphasise five main ideas. First, that Russia is a unique and great civilisation. So we should protect and preserve our common cultural space for future generations - the wealth of the Russian language, traditional tolerance and spiritual values. Second, that we need to build a competitive economy. Third, that we should use our national projects to substantially increase wages and pensions, and to generally improve the living standards of our compatriots. Fourth, that we should develop civil society institutions. Fifth, that we should build Russia's position as a sovereign state.

Which of these goals would you address first if United Russia wins enough votes to become a majority party again?

In most of its substance "Putin's plan" is already underway - both through the adopted laws and the three-year budget, which will become effective on January 1. The country is in good shape and we have managed to minimise the most dangerous threats facing it. Now we will embark on the next stage and ensure Russia's rapid progress in all key directions.