Satsivi: for a taste of a Georgian New Year 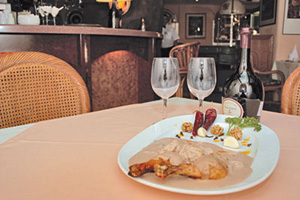 Georgia, the small country on Russia's southern rim where I happened to have been born, is known for two things: revolutions and great cuisine. The former is the consequence of a persistent post-Soviet hangover - with each president that gets overthrown (there have been two so far, and the current one isn't looking so hot) we get closer to an ideal form of government for our fiercely proud nation. Hopefully, by the end of this century, we'll get it right.

The food thing, however, we figured out centuries ago. Ask any child of the former Soviet Union which republic had the most delicious cuisine, and they'll tell you that, without doubt, it was Georgia.

Georgian cuisine has something for everyone. Vegetarians feel at home because of the many dishes made with beans, nuts, aubergine and not a hint of meat. Carnivores go wild for the staggering assortment of pork, lamb and beef recipes. And of course, visiting oenophiles think they've stumbled on a small corner of Eden - Georgia is a country so steeped in wine culture, the letters of the Georgian alphabet are said to be modeled on the grapevine.

While Georgians like to eat well year round, New Year is when every household pulls out its culinary big guns. Here's a recipe for satsivi, a chicken in walnut sauce that is one of Georgia's most popular - and delicious - New Year foods.

1. Place chicken into a good-sized pot, fill with cold water and bring to the boil. Add whole onion, salt and pepper. Cover, reduce heat and allow to simmer until the chicken is cooked.

2. Grind garlic and walnuts as fine as possible.

4. Remove the chicken from the pot. Sift and strain the bouillon, then add to the walnut and garlic mixture. Stir continuously - you are going for a sauce which is neither too thick nor too thin, something with the approximate consistency of thick buttermilk. The desired colour is a dull mustard yellow. Add salt, pepper and spices, to taste - ideally, the sauce should be spicy enough to leave a pleasant buzz in your mouth.

5. Transfer to a pot and let simmer, stirring continuously. Just as the sauce begins to boil, turn off heat and let it cool.

6. Add a teaspoon of vinegar, stir.

7. Finally, remove the skin from the pieces of chicken, add them to the sauce and mix well.

8. Satsivi is served cold or at room temperature, never hot. Don't simply eat the chicken and let all the great sauce go to waste - there should be plenty of bread on hand for dipping. To give your satsivi a super-authentic final touch, trickle a few drops of walnut oil (you can extract it from your ground walnuts by squeezing them between your fingers) onto the completed dish. It will form bright yellow polka dots on the surface. Enjoy your satsivi, and happy New Year!